A great day for decisive battles. 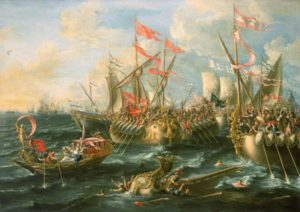 31 BC Battle of Actium

After the assassination of Julius Caesar in 44 BC, the Roman world came to be divided between the forces of Caesar’s nephew Octavian (later Augustus Caesar) and Caesar’s right-hand man, Marc Antony. Antony had taken up Caesar’s old mistress Cleopatra and become ruler of Egypt and the Middle East.  Octavian feared that Antony had ambitions to seize all of the Roman empire and confronted him in a naval battle off the coast of Greece. When the Egyptian fleet abandoned Antony, the battle was lost. Antony and Cleopatra were soon to commit suicide and leave Octavian as unchallenged emperor. 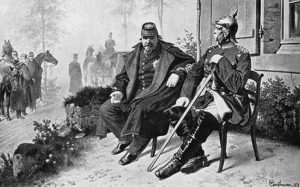 Napoleon III, the incompetent nephew of the great Napoleon Bonaparte, was foolishly goaded into a war with the German military powerhouse Prussia and was soundly beaten in the Franco-Prussian War. At the Battle of Sedan Napoleon III was captured (he is pictured above sitting with the German Chancellor Bismarck), his Second Empire government collapsed, and Prussia dictated harsh terms for peace. The French resentment over this defeat and the peace treaty helped lead to World War I. 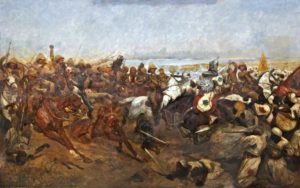 In the 1880s a Muslim prophet, Muhammad Ahmad, styled himself the Mahdi, a Messiah-like figure whom many Muslims believe is to rule on earth before the Final Judgement. The Mahdi drove the British and Egyptians out of the Sudan in 1885, killed General Gordon, the British governor, and set up a fundamentalist state. In 1898 an Anglo-Egyptian army, accompanied by gunboats and Canadian voyageurs, marched up the Nile to confront the Mahdi’s successor, the Khalifa, at Omdurman (near present-day Khartoum). The Mahdists greatly outnumbered the invaders but the British were much more heavily armed, equipped with machine-guns and heavy artillery. The effect of modern weaponry was devastating on the Sudanese spearman and cavalry. One observer noted: “They could never get near and they refused to hold back. … It was not a battle but an execution. … The bodies were not in heaps—bodies hardly ever are; but they spread evenly over acres and acres. Some lay very composedly with their slippers placed under their heads for a last pillow; some knelt, cut short in the middle of a last prayer. Others were torn to pieces.” Winston Churchill was present at the battle and took part in the cavalry charge depicted above. The Mahdists suffered 10,000 dead while the British lost 42 men.