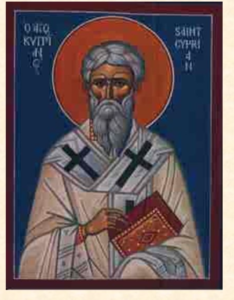 256 The Synod of Carthage reaffirms earlier African church council position that Christians baptised by the breakaway Novatian sect had to be rebaptised if they rejoined the Catholic church. This was defended by Cyprian (c. 200-58), bishop of Carthage but Pope Stephen mandated the reacceptance of the lapsed without a second baptism, causing severe tension between the papacy and the African church. Two years later Cyprian would be martyred when the Roman government renewed its persecution of Christians; he was canonized with his feast day September 16. 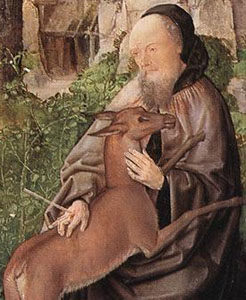 710 death of St Giles, one of 14 Holy Helpers. Giles (650-710) was a hermit in the south of France around whom legends of miracles and piety grew. In art he is depicted with a deer and a wound from an arrow. He is the patron saint of cripples, breast cancer, Edinburgh and the outcast. The 14 Holy Helpers are a group of saints whose intercession is deemed to be efficacious for certain diseases. Their cult seems to have sprung up in reaction to the Black death of the fourteenth century. 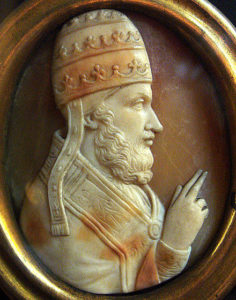 1159 Death of Pope Hadrian (or Adrian) IV, the only Englishman ever elevated to the papacy. Born Nicholas Breakspear c. 1100, he acquired a reputation as a reformer and administrator before his election. He is best known for placing the city of Rome under the interdict (a kind of mass excommunication) in order to drive out the rebel Arnold of Brescia and for granting the English king Henry II the lordship of Ireland, for which the Irish have never forgiven him. 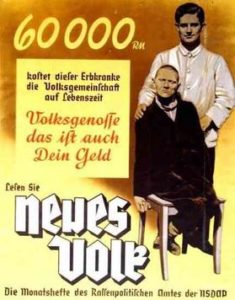 1939 Hitler begins the T-4 Euthanasia program. One of the reasons that fascists like Adolf Hitler and Benito Mussolini despised Christianity was that it loves the weak and helpless. Fascism is a philosophy for the strong and ruthless; that which can be destroyed must be destroyed. The Nazi eugenics policy moved from encouraging the mating of healthy Aryan youth to eliminating the chronically ill, mentally disabled, patients with incurable diseases and mental illnesses. Before the end of the war at least 70,000 Germans were euthanized through this policy.