Skip to content
Today is the 74th anniversary of the failed plot to kill Hitler by exploding a bomb in his Wolf’s Lair.
A conspiracy involving a number of high-ranking army officers planned to deliver a bomb to the conference room in which Hitler would be briefed on the conflict on the Eastern Front. It was a chemical explosive that was improperly primed because of the maimed hands of the officer planting it, Col. Claus von Stauffenberg, and the bomb was accidentally nudged under a thick oak table that prevented it from achieving its intended destruction. 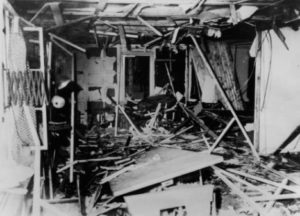 Inital reports indicated that the explosion had killed Hitler, leading to army units acting in Berlin on this wrong information. When it was discovered that der Fuehrer had only been wounded, the plot collapsed. Some officers were shot immediately, some committed suicide, and some were tried and hideously executed.
Even had it succeeded in eliminating Hitler, it is highly unlikely that the new German government could have negotiated a separate peace with the Western allies that would
allow the war to continue against the Soviet Union.