Skip to content
Speaking of murdered Russian princesses, we must not forget one of the most admirable of the species, Elizabeth of Hesse: known to her friends as Ella, and to the Orthodox Church as the Holy Martyr Elizabeth Romanova.
Reputedly the most beautiful princess of her generation, she had royal suitors lined up around the block, including the future German Kaiser Wilhelm II. She chose the shy Grand Duke Sergei Alexandrovich of Russia, uncle of the future Tsar Nicholas II. Later, as Governor of Moscow, Sergei gained the reputation of an oppressive administrator.

When Sergei was murdered in 1905, Elizabeth pleaded for the life of his terrorist assassin and went to his cell to forgive him. She sold all her jewels including her wedding ring and became a nun, founding an order of sisters that operated a hospital, pharmacy and orphanage for the poor.
During the Russian civil war, Elizabeth was arrested by the Bolshevik secret police, beaten, and thrown down a mineshaft with other prisoners. She survived the fall and the grenades that were thrown in after her. She was singing hymns and tending to the wounded when she died of suffocation from burning fuel poured on top of her. Lenin applauded Elisabeth’s death, remarking that “virtue with the crown on it is a greater enemy to the revolution than a hundred tyrant tsars”.
Her body was recovered by White forces and her remains were buried in Jerusalem. She was canonized by the Orthodox Church and, after the fall of Communism, her order was revived to continue the charitable work she had begun.
The statue illustrated is of her as one of the Martyrs of the 20th Century erected in Westminster Abbey. 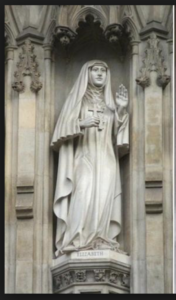 Elizabeth grew up speaking English: she was the grand-daughter of Queen Victoria and the great-aunt of Prince Philip, the husband of Elizabeth II.