Since we last featured St Elizabeth Romanova, let’s continue an examination of the Twelve Modern Martyrs featured above the West Door of Westminster Abbey. These biographies are taken from the Abbey’s website. 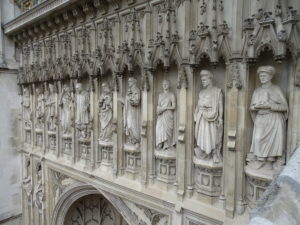 At Sangara mission station in Papua New Guinea there stands a row of graves: two of Australian women, Mavis Parkinson and May Hayman, and a third of Lucian Tapiedi. 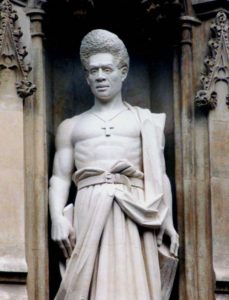 Tapiedi was born in 1921/2, in the village of Taupota, on the north coast of Papua. His father was a sorcerer, who died when his sons were still young. He was taught at mission schools and then, in 1939, he entered St Aidan’s teacher training college. Here Tapiedi became known as a diligent and cheerful presence, fond of physical recreation but also musical. In 1941 he became part of the staff at Sangara as a teacher and evangelist.

In December 1941 Japanese forces attacked the American fleet at Pearl Harbour. In the same month they invaded Malaya. British forces capitulated in Singapore in February 1942. The missionaries who lived in New Guinea watched events anxiously, and feared the worst. In January 1942 the Anglican bishop, Philip Strong, had broadcast an appeal to them to stay at their work, come what may. Many of the missionaries themselves wished this, and had already resisted calls to turn to safety.

On 21st July 1942 the Japanese invaded the island near the mission station at Gona. Three of the residents, Parkinson, Hayman and James Benson, fled inland and there encountered other Australians in hiding. But they were soon caught. The soldiers murdered Hayman and Parkinson at Popondetta.

In Northern Papua, meanwhile, a second group of missionaries struggled to evade capture. Among them was Lucian Tapiedi, who was determined not to abandon the missionaries with whom he worked. In a few days this group swelled to ten people. They came to a village inhabited by the Orokaiva people, and found themselves escorted away by men of that tribe. One of the Orokaiva, a man named Hivijapa, killed Tapiedi near a stream by Kurumbo village. The remainder of the group perished soon after; six of them beheaded by the Japanese on Buna beach.

333 Christians lost their lives in New Guinea during the invasion and occupation of the island by the Japanese forces. The greatest number of those who died – 198 – were Roman Catholics. But there were also Methodists, Salvationists, Lutherans, Anglicans, members of the Evangelical Church of Manus, and Seventh Day Adventists among the dead.

Now a shrine marks the place where Lucian Tapiedi died. His killer later converted to Christianity. He took the name Hivijapa Lucian, and built a church dedicated to the memory of his victim at Embi.