1934 Bonnie and Clyde gunned down 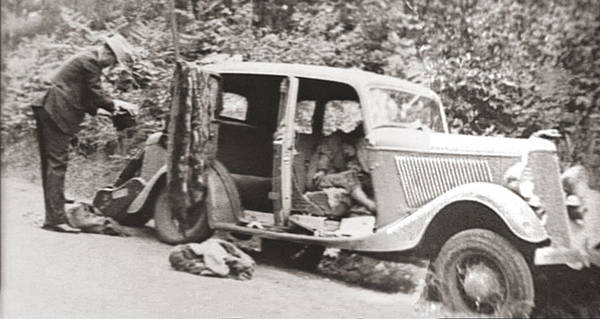 Fifty bullets riddled  the bodies of Clyde Barrow and Bonnie Parker, ending the careers of the two bank robbers. A posse of Texas Rangers ambushed the pair on a little-traveled road outside Shreveport, Louisiana. The man and his moll were in a gray automobile speeding along at 85 miles per hour when the officers opened fire from the road-side. After the volley, Barrow and Parker were found crumpled up, their guns clutched in lifeless hands.

Said one of the posse about the hailstorm of lead that greeted the outlaw couple: “Each of us six officers had a shotgun and an automatic rifle and pistols. We opened fire with the automatic rifles. They were emptied before the car got even with us. Then we used shotguns. There was smoke coming from the car, and it looked like it was on fire. After shooting the shotguns, we emptied the pistols at the car, which had passed us and ran into a ditch about 50 yards on down the road. It almost turned over. We kept shooting at the car even after it stopped. We weren’t taking any chances.”

Bonnie and Clyde had menaced the Southwest for the past four years, holding up banks, gas stations and luncheonettes. The desperadoes, both from Texas and in their mid- 20’s, collaborated on the murders of 12 people (9 of them police officers) in their last two years. Parker was reputed to be as good a shot as Barrow, if not better. 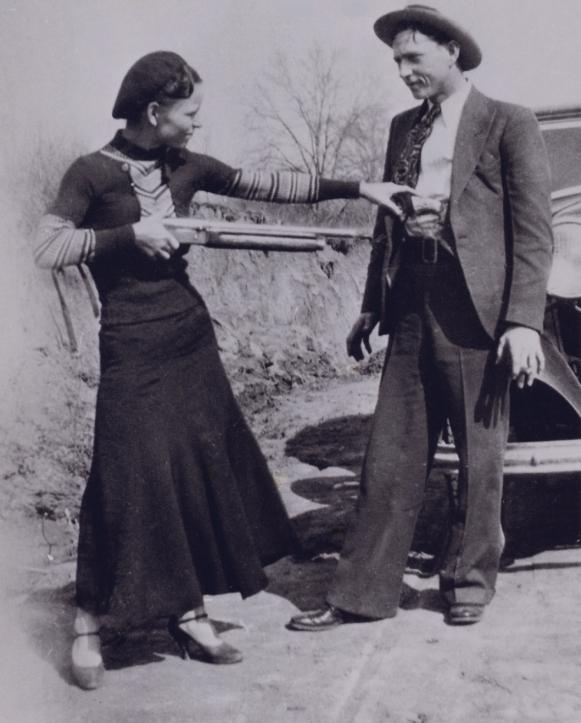 When the final shootout was over, Barrow and Parker were found with a veritable arsenal:  a dozen guns and several thousand rounds of ammunition. A half-eaten sandwich, a saxophone, and 15 sets of license plates from different states were in the car. One of the Texas Rangers, Frank Hamer, said, “I hate to bust a cap on a woman, especially when she was sitting down. However, if it  hadn’t been her, it would have been us.”

The 1967 film, Bonnie and Clyde, with Warren Beatty and Faye Dunaway, glorified the sociopathic pair, while The Highway Men (2019), starring Kevin Costner and Woody Harrelson told the story from the point of view of the law.