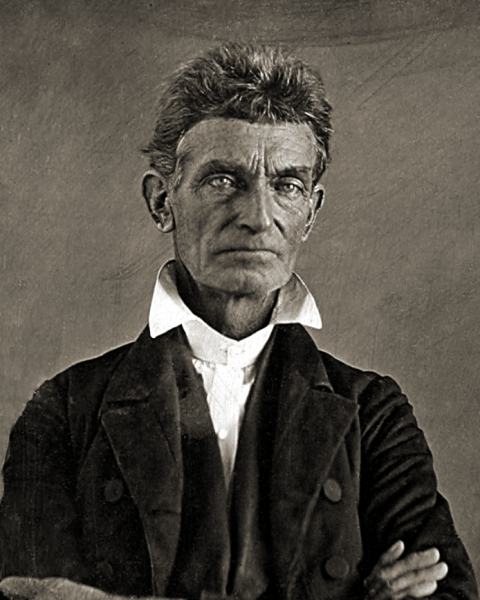 Bleeding Kansas again. John Brown was an abolitionist activist who had recently moved to the Kansas Territory to aid the forces of anti-slavery settlers. In May, 1856, he joined a group riding to the aid of the town of Lawrence, centre of the Free State movement, which was threatened by a pro-slavery militia. Finding, en route, that they were too late to be of any use to Lawrence, Brown, four of his sons, and two other men decided to march toward Pottawatomie Creek, near present-day Lane, Kansas, to the homes of pro-slavery sympathizers.

On the night of May 24th, 1856, Brown banged on the door of James Doyle and ordered the men inside to come out. Brown’s sons then attacked them with broadswords. They executed three of the Doyles, father and sons (a 16-year-old boy was spared after his mother pleaded for his life), splitting open heads and cutting off arms. Brown himself put a bullet into the head of James Doyle. The gang then sought out other pro-slavery supporters in the area. They traveled to Allen Wilkinson’s home, where, against the protestations of Wilkinson’s wife, who was sick with the measles, they took Wilkinson and hacked him to death, leaving his body alongside the road.

Brown’s men then crossed to the south bank of the creek and approached the home of James Harris. Here Brown’s group found several guests and questioned them about their views on slavery and whether they had participated in the attack on Lawrence earlier in the week. William Sherman’s answers did not satisfy Brown, and he was killed behind the residence and his body left in the creek. The Browns then disappeared into the night.

Proslavery forces launched a manhunt, plundering homesteads as they searched the countryside for the Pottawatomie killers. John Brown took to the woods and evaded capture. His sons did not fare as well; John Jr. and Jason — neither of whom had been involved at Pottawatomie — were savagely beaten. Frederick was shot through the heart at the Battle of Osawatomie and Brown’s Station was burnt to the ground.