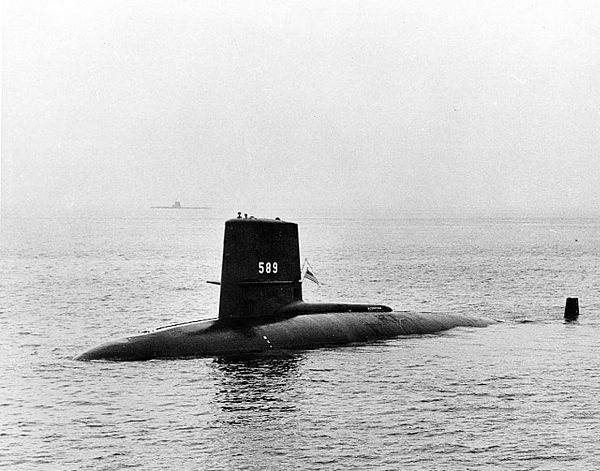 Loss of the Scorpion

The USS Scorpion was a Skipjack-class nuclear submarine of the United States navy launched in 1960. It carried a crew of 99 and was designed to be an extremely fast hunter-killer of both surface vessels and enemy submarines. It had almost unlimited range and could travel at 61 kmh underwater. In 1966 Scorpion penetrated Soviet waters and secretly filmed a Russian missile launch.

In May 1968 Scorpion was assigned to follow and observe a Soviet task force in the Atlantic, a flotilla that included two attack submarines. Having done that, it was to return to its home base in Norfolk, Virginia. It never reached its destination. A radio message was received on May 21 that the boat was following the Soviet vessels but no more was ever heard from it. A search was launched before news of its disappearance was released to the public, but it was not until October, 1968 that  the wreckage of the Scorpion was found at the bottom of the Atlantic 740 km southwest of the Azores and over 3 km below the surface.

Cause of the loss of the boat has never been conclusively determined but many have speculated that one of its own torpedoes had exploded. A more sensational charge is that the Soviets had sunk Scorpion — dangerous games between submerged vessels of opposing navies were not unknown during the Cold War. Moreover, the Soviets had lost one of their own submarines earlier that year when the K-129 sank in the Pacific; conspiracy theorists posit that the Russian navy blamed the U.S. for this and that Scorpion was attacked in revenge.

To add to the mystery, two other submarines were lost in 1968: the Israeli sub Dakar sank in the Mediterranean and the French Minerve off the coast of France.