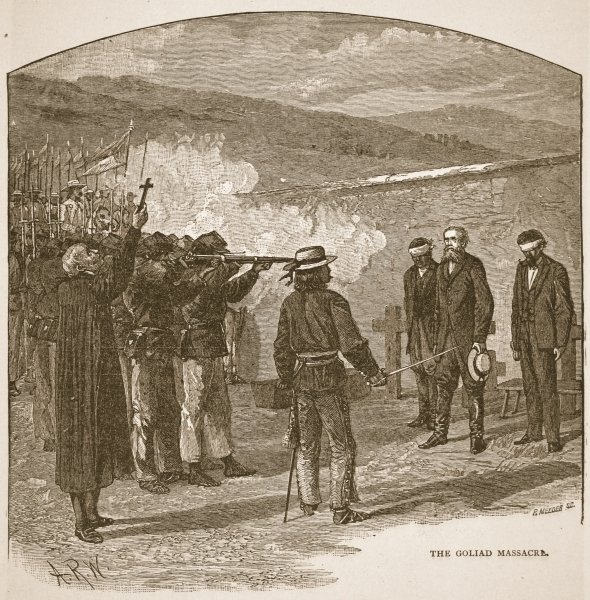 In October 1835 American settlers in the province of Texas rebelled against the Mexican government of General Antonio Lopez de Santa Anna. After a series of inconsequential battles, Santa Anna’s army began to rack up victories over the disorganized Texians, first at the Battle of the Alamo and then at Coleto. His policy was to follow up military successes with calculated atrocities, killing prisoners so as to deter any further flood of volunteers from the United States. A Mexican law passed in December 1835 declared that all armed foreigners taken in combat were to be treated as pirates and executed: no quarter was given at the Alamo and in March 1836, Santa Anna order the massacre of hundreds of American prisoners which had been gathered at Goliad.

Despite pleas for mercy from his junior officers, Santa Anna remained adamant. On Palm Sunday, 1836 nearly 500 prisoners were shot, bayoneted or bludgeoned to death. Some were able to escape and some were rescued due to the efforts of “The Angel of Goliad”, Franchita Alavez, the mistress of a Mexican officer. Rather than deterring American efforts, the massacre seems to have inspired the Texians to become more united and attract more support. In April a force of rebels encountered a larger body of Mexican troops at San Jacinto. With shouts of “Remember Goliad, Remember the Alamo!” the Texians defeated Santa Anna’s force and captured him the next day. In return for his freedom and a safe return to Mexico he acceded to the creation of an independent Republic of Texas.