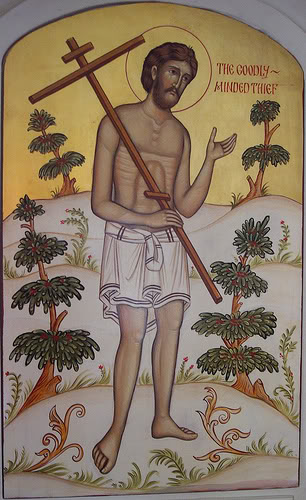 The Feast of St Dismas

Now one of the criminals hanging there reviled Jesus, saying, “Are you not the Messiah? Save yourself and us.”  The other, however, rebuking him, said in reply, “Have you no fear of God, for you are subject to the same condemnation? And indeed, we have been condemned justly, for the sentence we received corresponds to our crimes, but this man has done nothing criminal.”  Then he said, “Jesus, remember me when you come into your kingdom.”  He replied to him, “Amen I say to you today you will be with me in Paradise.” Luke 23: 39-43

For centuries it was the custom of Christian storytellers to fashion names and legends for the unnamed characters who appeared in the life of Jesus. The soldier who pierced the side of Jesus, for example, was identified as Longinus; the Bad Thief was Gestas and the Penitent Thief was Dismas. In medieval art, St Dismas is often depicted as accompanying Jesus in the Harrowing of Hell.

The California town of San Dimas (sacred to fans of Bill and Ted’s Excellent Adventure) and the Church of the Good Thief, built by prisoners in Kingston, Ontario take their cue from Dismas, who, his devotees say, was the only saint directly canonized by Christ.