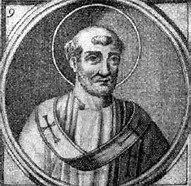 The Feast of Pope Sixtus III

“May you live in interesting times” is supposed to be an ancient Chinese curse, part of a triplet of ill-wishes which includes “may you come to the attention of the authorities” and “may you achieve your desires.” Sixtus III (r. 432-40) lived in times that were full of interest and he played an important role in them.

Sixtus, one of 79 popes to be recognized as a saint, is probably best known for his building program of Roman churches and his attempts to repair the damage done to the city by the Visigoth sack of 410.  He refurbished the original St Peter’s basilica and the church of St John Lateran as well as dedicating new churches such as Santa Maria Maggiore and the basilica of Santa Sabina. The building of Santa Maria Maggiore reflects the intense devotion to the Virgin Mary which arose out of the Council of Ephesus which decided that Mary could be given the term “Theotokos” or “God Bearer.”

The mid-fifth century was a time of vigorous and rancorous theological debate. Originally a supporter of the British monk Pelagius, Sixtus eventually declared himself against the extreme free-will doctrines of Plagiarism and also waged ideological war against Nestorianism. Sixtus was succeeded by his deacon Leo, who became the first of only two popes to be called “the Great”.