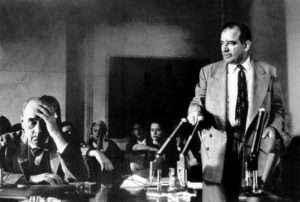 After being wartime allies, the relationship between the Soviet Union and the western democracies degenerated into a Cold War which resulted in both sides maintaining huge armies facing each other in central Europe. Back in North America, the Igor Gouzenko revelations pointed to Americans working as Russian spies in the US and spoke of Americans with loyalties wider than just their native land. Coupled with Soviet expansionism in Europe and the growing power of the Communist Party of China versus wartime US ally Chiang Kai-shek, dislike of communism again took root. The crusade against Reds was first led by HUAC, the Congressional House Un-American Activities Committee, which dated from before the war but which was in 1945 made a powerful standing committee of the House with wide-ranging powers of investigation. Though HUAC had failed miserably in showing any real communist penetration of the movies, this attack on the so-called Hollywood Ten silenced the protests from the entertainment industry, created a blacklist of writers and performers whose careers were ruined, and set the stage for an anti-communist witch-hunt of government officials.

Anti-communist groups, such as the American Legion and firms of private investigators specializing in loyalty checks, spread stories about secret battalions of 75,- 80,000 trained communists manipulating a million leftist dupes, camp followers, and fellow travellers. Neighbourhood anti-communist watch groups were formed, sponsors of suspected programs or radio personalities were threatened with boycotts, libraries were scoured for leftist comics and books. This anti-communist mood forced a reluctant President Truman to institute government actions against federally-employed suspects. Loyalty boards screened civil servants and army personnel, firing many, not for disloyalty or treachery, but for once having belonged to left-wing causes or parties. Sensational cases included that of civil servant Alger Hiss whom Congressman Richard Nixon accused on television of spying for the USSR — Hiss denied it but was ruined; Nixon was launched into national prominence and was made Eisenhower’s V-P candidate in 1952 election.

This paved the way for further probes — the Rosenberg spy case sentenced Julius and Ethel Rosenberg to the electric chair for passing on nuclear secrets to the Soviets who had soon produced the A-bomb and the H-bomb with help from such spies  — and convinced some politicians that the way to popularity with the voters was by denunciation of hidden communists. The leading proponent of this was the Senator from Wisconsin Joe McCarthy who in 1950 began announcing he had a list of red agents in the State department. The State Department was widely blamed for the failure of the US to support Chaing Kai-shek and the subsequent loss of China to the Communists, and though McCarthy’s accusations were usually drunken ramblings and without substance, they did create a climate of fear and an atmosphere of what became known as McCarthyism: guilt by association, intimidation of witnesses and abuse of democratic process. He announced that he had discovered 30,000 books in USIS libraries abroad were by Communist or pro-Communist writers: Sovietolators as they were called and he succeeded in panicking officials wherever his gaze lighted. His success lay in using television and mobilizing grass-roots anti-intellectualism and xenophobia and distrust of the university-trained, upper-class, anglo-Protestant elite in government as well as their urbanized, educated Jewish counterparts.  His downfall came when he attacked the US Army for sheltering communists — the establishment which had hitherto been timid came forth to denounce him and his alcoholic excesses caught up with him. On this day in 1954, Joseph Welch the attorney representing the Army lashed out at McCarthy, asking him in front of the television cameras: “You’ve done enough. Have you no sense of decency, sir, at long last? Have you left no sense of decency?”

By December 1954 his colleagues in the Senate censured him for his behaviour; his reign had ended and he was not re-elected for a third term. But consider this: McCarthy succeeded in his crusade though he himself was brought down. He helped discredit leftist policies and officials left over from the Roosevelt era; he redefined political discourse in terms of “American-mindedness” and even his left-wing opponents had to claim that they themselves had espoused “Americanism” for years. The labour movement had to move to the right. In 1950 the CIO expelled 11 national unions, 20% of its own membership, for alleged Communist leadership. Just a few months before his downfall in 1954 a supporter of McCarthy wrote this in a magazine article: “As Russia and Red China advance nightmarishly toward the maximum power goals which they will reach in the 1970s, the American people will be as unlikely to think seriously of anything else, as to ignore an onrushing comet. Communism will be the issue of the 1950s and sixties. Those American leaders who most surely interpret the emotions of the American public in the face of the Communist challenge will be the man who will dominate American politics. Today Senator McCarthy is the articulate voice of the American people in a Communist-haunted age. On this issue he marches with history. He cannot lose.”