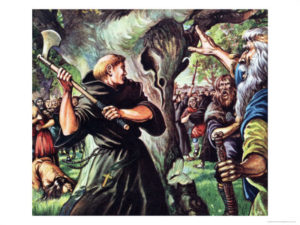 Born about 675 as Wynfrith in Anglo-Saxon England, Boniface was a teacher before entering the priesthood at about age 30. He could have become an abbot in his native country but dedicated himself to taking the gospel to the German-speaking peoples of northwestern Europe, first in Frisia, and then Germany, to which Pope Gregory II (who gave him the Latin name Boniface) appointed him a travelling bishop — the largely pagan territory had not yet developed an ecclesiastical infrastructure.

Working with the tepid support of the Frankish regime, which had designs on expanding into more German lands and which welcomed Christianization of the natives, Boniface preached, set up monasteries, and organized dioceses in these border lands. His most storied exploit was the destruction of a pagan shrine in Hesse by chopping down an oak sacred to Thor. (From this came the spurious tale of his inventing the Christmas tree by giving the Germans a conifer in replacement for the oak.)  He was named archbishop of Germany and later papal legate, high titles which disguised the shaky ground that nascent Christianity occupied on the frontier. In 754 he attempted to evangelize the Frisians but was murdered along with his companions by pirates. Among his relics is a book, “On the Advantage of Death” by St Ambrose, bearing the mark of an axe or sword supposedly used in the massacre. 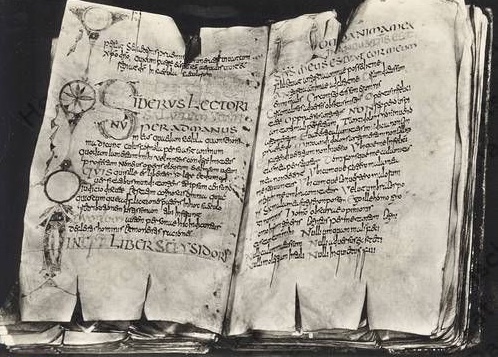 In the estimation of historian Christopher Dawson, Boniface had a deeper influence on Europe than any other Englishman. Boniface is the patron saint of Germany, brewers, tailors, and file-cutters.