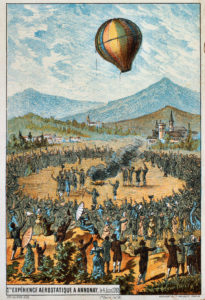 Joseph-Michel Montgolfier (1740 – 1810) and Jacques-Étienne Montgolfier (1745 –  1799) developed a balloon made of sackcloth and paper, propelled by hot air. The younger brother made the first human ascent in a balloon in front of a large crowd of French dignitaries at Annonany in southeastern France. The journey lasted about 10 minutes, with the craft reaching an altitude of perhaps a mile. This led to further, more ambitious attempts. Those interested in this subject will learn almost nothing about it in the Monty Python sketch below.