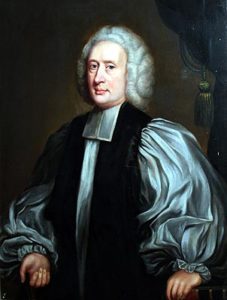 Joseph Butler: “Every thing is what it is, and not another thing.”

On this day Anglican churches honour the memory of Bishop Joseph Butler (1692-1752), controversialist and philosopher. Born a Presbyterian and thus barred from entering a university or the learned professions, Butler converted to the Church of England in his early twenties and became an Anglican priest. With the help of prominent patrons he rose through a series of lucrative appointments to become the Queen’s chaplain and eventually bishop of Bristol and Durham.

Today Butler is chiefly known as a philosopher, having taken on English heavyweights such as Thomas Hobbes (in his 1729 Fifteen Sermons Preached at the Rolls Chapel) and John Locke (in his 1736 Analogy of Religion) as well as the proponents of Deism, then very popular amongst English academics. The Internet Encyclopedia of Philosophy tells us

Overall, Butler’s philosophy is largely defensive. His general strategy is to accept the received systems of morality and religion and, then, defend them against those who think that such systems can be refuted or disregarded. Butler ultimately attempts to naturalize morality and religion, though not in an overly reductive way, by showing that they are essential components of nature and common life. He argues that nature is a moral system to which humans are adapted via conscience. Thus, in denying morality, Butler takes his opponents to be denying our very nature, which is untenable. Given this conception of nature as a moral system and certain proofs of God’s existence, Butler is then in a position to defend religion by addressing objections to it, such as the problem of evil.