And now for some really good examples of personal vituperation. 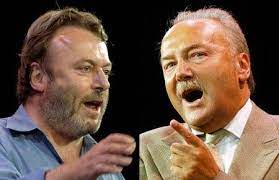 Two British public figures slugged it out early in the 21st century. Christopher Hitchens, a witty commentator known for his aggressive atheism and flight from far-left politics to a position which supported the American invasion of Iraq, faced off against Scottish Member of Parliament George Galloway, who courted Muslim voters and backed the Syrian Assad regime. Neither let courtesy get in the way during their debates and writings.

Made natural history by metamorphosing from a butterfly to a slug. – George Galloway on Christopher Hitchens

How unwise and incautious it is for such a hideous person to resort to personal remarks. Unkind nature, which could have made a perfectly good butt out of his face, has spoiled the whole effect by taking an asshole and studding it with ill- brushed fangs. – Christopher Hitchens on George Galloway

Ready to fight to the last drop of other people’s blood. – George Galloway on Christopher Hitchens