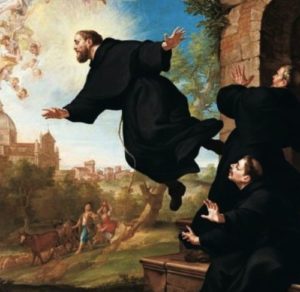 Joseph of Cupertino, the levitating saint

Giuseppe Maria Desa (1603-63) was a very unpromising recruit to the Catholic clergy in seventeenth-century Italy. He was born to poor parents in a garden shed because his father had been forced to sell their house to settle debts.

As a young shoemaker he tried a number of times to join a monastic order but was rejected because of his low intelligence, clumsiness, and frequents fits of temper and bizarre ecstasy. He served as a helper in the tables of an abbey of Franciscan Conventuals before he was admitted to the order and becoming a priest. Joseph soon attracted attention by levitating during the Mass and by falling into trances at the sound of church bells or hearing a psalm – phenomena that convinced the locals that he was saintly. These levitations had been publicly witnessed — such as when he placed a 36-foot cross atop a church — and attracted amazement from crowds of believers, and suspicion from the Inquisition that he was dabbling in the diabolical arts. His superiors isolated Joseph from the public for years and he died in seclusion. For his patience and humility he was canonized in 1763. He has been declared the patron saint of air travellers, pilots, astronauts, the mentally handicapped, test takers and poor students.