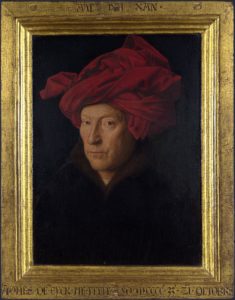 The explosion of artistic genius in the Netherlands in the 15th and 16th centuries is often referred to as part of the “Northern Renaissance” but I would categorize it as “Late Gothic”; there is not in the works of painters such as van Eyck, Bosch or Brueghel much of the contemporary Italian fascination with pagan mythology, sexually-charged topics, or obsession with perspective.

Jan van Eyck was born sometime before 1390 and reached the height of his talent in the decade before his death. He was often patronized by the Duke of Burgundy who ruled much of the Netherlands and who offered van Eyck both artistic and diplomatic commissions. Van Eyck was an early master of oil painting, so much so that a century later Giorgio Vasari credited him with inventing the technique.

Some of his masterpieces are: 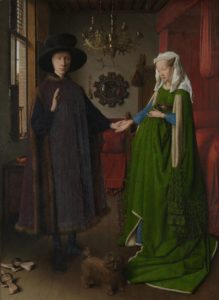 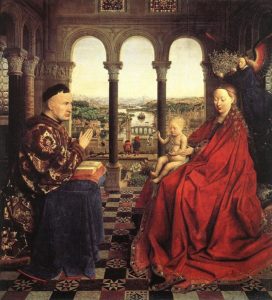 The Virgin of Chancellor Rollin 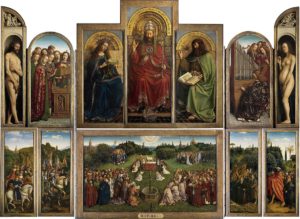 A critic has said of van Eyck  that “from the fifteenth century onward, commentators have expressed their awe and astonishment at his ability to mimic reality and, in particular, to re-create the effects of light on different surfaces, from dull reflections on opaque surfaces to luminous, shifting highlights on metal or glass … Through his understanding of the effects of light and rigorous scrutiny of detail, Van Eyck is able to construct a convincingly unified and logical pictorial world, suffusing the absolute stillness of the scene with scintillating energy.”