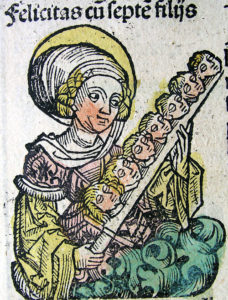 The martyrdom of St Felicitas

Little is known for certain about St Felicitas (or Felicity) other than the site of her grave in Rome and that her martyrdom was marked by a homily preached by St Gregory the Great in a church erected over her tomb. Legend, however, gives us more data. According to Butler’s Lives of the Saints:

Felicity was a noble Christian woman who, after the death of her husband, served God in a state of widowhood and employed herself in prayer and works of charity. By the example of this lady and her family many idolaters were moved to embrace the faith of Christ. This angered the pagan priests, who complained to the Emperor Antoninus Pius that the boldness with which Felicity practised the Christian religion drew many from the worship of the immortal gods, who on that account would be angry with the city and state. The emperor was prevailed upon to send an order to Publius, the prefect of Rome, and he caused the mother and her sons to be apprehended and brought before him. He took Felicity aside and used the strongest inducements to bring her to sacrifice to the gods, that he might not be obliged to proceed with severity against her and her sons; but she answered, ” Do not think to frighten me by threats, or to win me by fair speeches. The spirit of God within me will not suffer me to be overcome, and will make me victorious over all your assaults.” ” Unhappy woman “, replied Publius, ” if you wish to die, die; but do not destroy your children.” ” My children “, said she, ” will live eternally if they are faithful, but must expect eternal death if they sacrifice to idols.”

The next day the prefect sent for Felicity and her sons again, and said, ” Take pity on your children, Felicity, they are in the bloom of youth.” The mother answered, “Your pity is impiety, and your words cruel.” Then, turning towards her children, she said, ” My sons, look up to Heaven, where Jesus Christ with His saints expects you. Be faithful in His love, and fight courageously for your souls.” Publius commanded her to be beaten, saying, ” You are insolent to give them such advice in my presence, in contempt of the orders of our prince.” He then called the boys to him one after another, and mixed promises with threats to induce them to worship the gods; but they all refused and, after being whipped, were remanded to prison. The prefect laid the whole process before the emperor, who gave an order that they should be sent to different judges and be condemned to different deaths. Felicitas implored God only that she not to be killed before her sons, so that she might be able to encourage them during their torture and death in order that they would not deny Christ.  Januarius was scourged to death, Felix and Philip were beaten with clubs, Silvanus was thrown headlong into the Tiber, and Alexander, Vitalis and Martial were beheaded; the same sentence was executed upon the mother last of all.