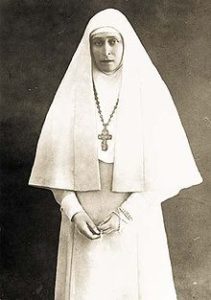 The murder of Grand Duchess Elizabeth of Russia

The Holy Martyr Yelizaveta Fyodorovna was born in 1864 as Princess Elisabeth of Hesse, the grand-daughter of Queen Victoria and daughter of the Grand Duke of the German state of Hesse. As one of the most beautiful aristocrats of her generation, she attracted the romantic interests of princes and kings including the future Kaiser Wilhelm of Germany, but she married into the Russian royal family. In 1884 she married the Grand Duke Sergei, younger brother of the Tsar and uncle of Russia’s last Romanov ruler Nicholas II. She converted to Orthodoxy from Lutheranism and was a well-accepted member of the upper reaches of Russian society when Alexei was made Governor of Moscow.

The Russian Empire in the early 20th century was full of political turmoil and revolutionary fervour, which made Alexei, a royalist hardliner, a favoured target for terrorist assassins. In February, 1905 a hit squad of the Socialist-Revolutionary party blew the Grand Duke to bits as he rode in his carriage through the streets of Moscow. Elizabeth went to the jail to speak with his murderer and begged for him to repent; she pleaded with the authorities to spare his life but the young man, poet Ivan Kalyayev, demanded the death penalty, saying that his death would be more beneficial to the revolutionary cause than that of the Grand Duke.

After this tragedy, Elizabeth forsook her high status, sold off her jewels and possessions, entered a nunnery and devoted her life to prayer and charity. She opened an orphanage and hospital and worked with the poor of Moscow’s slums. This counted for nothing after the Bolshevik Revolution broke out. In 1918 she was arrested by the Cheka, the Communist secret police, and was murdered along with her maid and another nun, and some high-ranking officials. She was thrown down a mine shaft and grenades tossed in to finish the job. Her body was later recovered and smuggled to China and then to Jerusalem where she and her husband had founded a convent. She is buried there. A statue of the Grand Duchess is one of 10 Martyrs of the Twentieth Century that stand above the west door of Westminster Abbey.