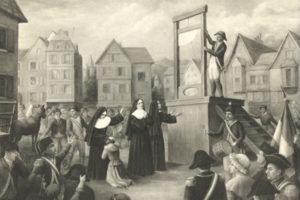 The French Revolution had begun in 1789 as a way to secure human rights for all citizens to enjoy, and its early days saw the triumph of middle-class liberalism: freedom of the press, freedom of religion, an end to feudalism and arbitrary arrest, under a constitutional monarchy. But soon it turned against the Catholic Church, confiscating its land, dissolving the monasteries, severing the ties with the papacy, and mandating that clergy serve a state church. This caused great consternation in the country and alienated King Louis XVI and many others from the Revolution. But radicals were prepared to go much farther and soon the Revolution turned against Christianity itself. Thousands of clergy were arrested, church services were forbidden, and a propaganda campaign of blasphemy and vilification was undertaken. Priests and nuns were forced to marry, the word “saint” was removed from streets and place names, tombs and monuments were desecrated and destroyed. “Religion”, said one radical, “is nothing but a mass of stupidities and and absurdity . . . A true republican cannot be superstitious; he bends the knee before no idols; he worships liberty alone; he knows no other cult than that of loving his country and its laws. The cross has become, in the eyes of the humanist thinker, a counter-revolutionary emblem.” In 1792 massacres of clergy began; these accelerated with the Terror of 1793-94.

In June 1794 a group of nuns living in a community in Compiègne was arrested for refusing to abjure their vows. Sixteen Carmelite nuns and lay sisters were taken to Paris for trial and were condemned to death. Most were middle-aged women, the youngest was 29 and two were 78 years old. On the evening of July 17, in the Place de la Nation, one by one, beginning with the youngest, the nuns mounted the steps of the guillotine to be beheaded. As they awaited their deaths they sang the psalm Laudate Dominum omnes gentes : O praise the Lord all ye nations! Praise him all ye people! For his mercy is confirmed upon us and the truth of the Lord remains forever. Praise the Lord! One by one, as their turn came to die, they kissed a little statuette of the Virgin and Child held out to them by Mother Theresa, their prioress, at the bottom of the stairs. Finally, she too, the last remaining alive, singing still, climbed up to be killed.

The constancy of these women very much impressed the crowd and added to the growing disgust of Parisians for the Terror, which was ended brutally less than two weeks later by the execution of its inventor Maximillien Robespierre and his henchmen. Francis Poulenc’s operatic masterpiece Dialogues of the Carmelites (1957) takes historical liberties with the story but is a powerful tribute to the martyrs.