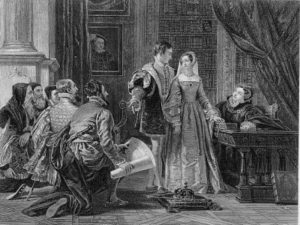 Henry VIII’s desire to have a legitimately-born son to follow him in the Tudor dynasty led to all manner of marital distress, political turmoil, and the withdrawal of the Church of England from its subjection to the papacy. In 1544 Henry passed a scheme of royal succession. The throne, on his death, would pass to his only surviving son Edward (raised as a Protestant); if he died without children, the throne would go to Mary, his eldest daughter (and a Catholic); if Mary were to prove childless, she would be succeeded by Henry’s youngest daughter, Elizabeth (religiously ambiguous). Should all of his children die without issue, the throne would go to the successors of Henry’s younger sister Mary Tudor, the line which included Lady Jane Grey (1536-1554).

When Henry died in 1547, Edward VI instituted a Protestant national church, the beginning of Anglicanism as we now know it. For almost six years he legislated against Catholic practices, instituted a new Prayer Book, allowed clergy to marry, and placed Protestant ministers and professors in positions of power. In this he was supported by some, though by no means all, of the political class. By 1553 it was clear that Edward was not going to live long and steps were taken to disinherit Mary, still obdurately Catholic. Elizabeth was still, by law, considered a bastard and was thought to be religiously unreliable, so plans centred on Lady Jane Grey. Jane had been raised a firm Protestant and had been married off unwillingly to the son of the greatest Protestant noble, the Duke of Northumberland. In his “Devise for the Succession”, Edward sought to preserve Protestantism by placing Jane on the throne.

At Edward’s death in July 1553, the Protestants of the political class, including the Archbishop of Canterbury, Thomas Cranmer, had Jane declared Queen and set her securely in the Tower of London to await the result of the rest of the coup. The key was the arrest of Mary and Elizabeth to keep them from raising support for the legitimate line. Mary slipped through Northumberland’s fingers and assembled so many armed partisans and so much public goodwill that after nine days the coup collapsed. Mary promised religious toleration and, on July 19, Jane stepped down. By early 1554 Mary was well on the way toward the active persecution of English Protestantism. Jane, her husband, and father-in-law were considered too dangerous to live. On February 12, Jane went to the block to die, becoming a romantic martyr for the reformed cause.