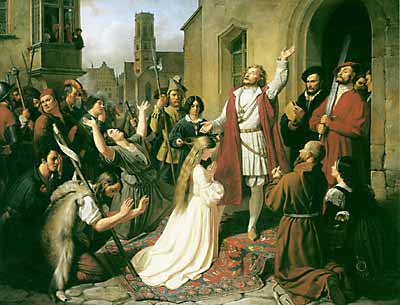 Though the Protestant Reformation caused division and violence throughout Germany there were cities where an uneasy truce between Lutherans and Catholics was maintained, often because neither side was a sufficiently numerous to oppress the other. One such city was Münster in Westphalia, nominally under the rule of a Catholic prince-bishop but so evenly divided between factions that the city developed a reputation for religious tolerance. Seeking that freedom from persecution, in January 1534 large groups of Anabaptists began migrating to the city, lured by the promise that this was the “New Jerusalem”. Making common cause with many local Lutherans the Anabaptists soon gained control of the city, driving Catholic inhabitants out and demanding that adult baptism become compulsory. A Dutch  baker named Jan Matthys assumed leadership, preaching a message of Christian communism and the expectation of the End of Time; Münster had become the centre of a radical form of Protestantism that called on the people of Germany and the Netherlands to come to their aid to break the siege that the expelled bishop had surrounded the city with.

On Easter Sunday 1534 Matthys led an ill-advised sortie against the bishop’s troops which resulted in his death. Jan of Leiden, a tailor, took over the city, proclaiming himself king, the successor of David, with the former mayor Bernard Knipperdolling as his sword-bearer and executioner. Polygamy was the order of the day with Jan taking sixteen wives and murdering one who refused to wed him. Though all goods were to be held in common, the inhabitants of the city starved while Jan sat on a gold throne and his circle dined well. Finally, the gates of Münster were opened by a desperate Anabaptist and the army of the bishop poured in, intent on loot and massacre. Leiden and Knipperdolling were tortured and hoisted up in steel cages on the town’s highest church steeple where their remains were visible for centuries as a lesson against radical excesses.