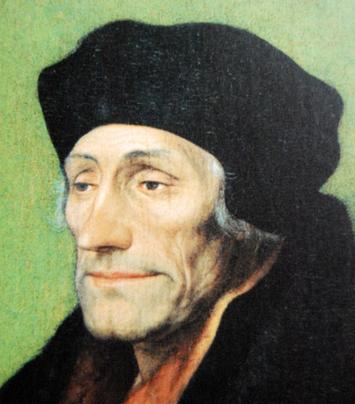 Erasmus dedicates his revised version of the New Testament to Pope Leo X.

Erasmus of Rotterdam (1466-1536) was the leading public intellectual of his time, a humanist who used new attitudes and techniques to critique the Christian Church of the early modern period. Born the illegitimate son of a Catholic priest, he became a priest himself but spent his life pursuing humanistic studies and being supported by a series of patrons of the new learning. He travelled widely and became something of a literary celebrity, winning fame for his works in Latin such as Utopia and Praise of Folly, which was critical of Church teaching on purgatory and indulgences.

Influenced by John Colet’s historical approach to Scripture, Erasmus applied his knowledge of Greek and Latin to produce a revised version of the New Testament, amending numerous errors in the Vulgate, the 1,000-year-old Latin version. Though his translation work had papal approval, Erasmus’s Greek New Testament was a spur to many vernacular versions including Luther’s highly influential German version.

Erasmus had enemies on both sides of the religious wars that soon erupted. He and Luther disagreed on the possibility of free will and the nature of the Eucharist while later popes placed his works on The Index of Prohibited Books.