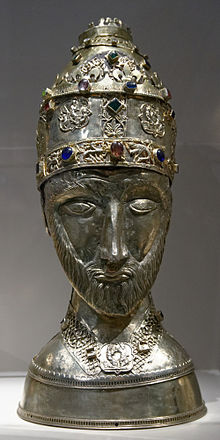 Accession of Pope Sylvester I.

Few popes could have reigned at a more important time in the history of the Church. It was during his pontificate that the emperor Constantine was converted to Christianity and that religion began to openly flourish in the Roman empire. This was also the time when the first great churches were erected, especially St Peter’s Basilica in Rome, which endured for over 1,000 years before it was levelled to make way for the neo-classical building that now exists on that site.

Sylvester may be even more important for the legends that surrounded him after his death than anything he accomplished in life. Early in the sixth century stories began to be written about an especially close relationship between Sylvester and Constantine, stories in which the emperor, out of gratitude for being cured of leprosy, is said to have elevated the bishop of Rome above all other church figures and submitted himself to him. By the 700s this legend took the form of one of the great forgeries of all time, the Donation of Constantine, which claimed that Constantine, before moving east to his new capital in Constantinople, had granted the papacy sovereignty over the western empire. This document was used by later popes in their political quarrels with emperors and kings before being exposed as fake in the 1400s by Lorenzo Valla. 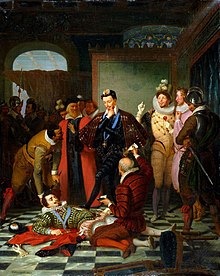 Guise was the leader of the ultra-Catholic faction during that phase of the French Religious Wars known as The War of the Three Henrys, in which Guise battled the centrist monarch Henri III and the Protestant leader Henri de Navarre. Guise, who had urged the St Bartholomew’s Day Massacre of French Huguenots, was assassinated by Henri III in 1588.

Simons (1496-1561) was a Dutch Catholic priest who converted to Anabaptism in 1536 after the death of his brother Pieter who had been a follower of the radical Münsterites. Simons rejected the violent path that his brother and other Anabaptists had taken, preaching a pacifist message of separation from the world and adult believer baptism. Many Anabaptist denominations sprang up following his teachings.