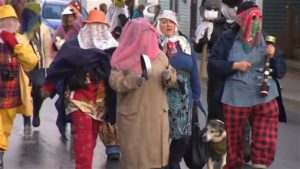 A clear signal that social inversion is in effect and that festive misrule and license will be tolerated temporarily is for one sex to assume the dress of another. This has its origins in the Roman feast of Saturnalia held in late December and it continued after the Christianization of Europe. Numerous edicts exist from the Middle Ages in which authorities decry transvestism at Christmas amongst the lower clergy and popular folk customs. In 1445 by the Paris Faculty of Theology complained: “Priests and clerks may be seen wearing masks and monstrous visages at the hours of office. They dance in the choir dressed as women, panders or minstrels.” The Staffordshire Horn Dance has a cross-dressing cast member called Maid Marian while guisers on the Scottish borders provide comic relief with the figure of Bessie the Besom, a man dressed as an old woman. In Newfoundland mumming both sexes will participate dressed as the other, with young women disguised as sailors and men known as “ownshooks” clad as women. In Nova Scotia the females who went belsnickling dressed as Wise Men were called Kris Kringles.