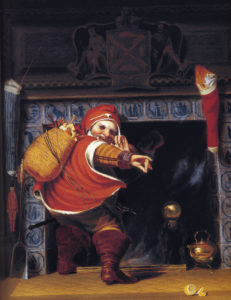 This is the world’s first oil painting of Santa Claus. It dates from 1837; the work is “Santa Claus or Saint Nicholas” by Robert Weir.  Weir (1803-89) was a member of the Knickerbocker circle and taught art at West Point Military Academy, where one of his pupils was James McNeil Whistler. His gift-bringer is caught in the act of ascending the chimney and (in homage to a gesture attributed to Saint Nicholas in both the Knickerbocker History and Moore’s poem) has turned to lay his finger aside of his nose. Weir produced several versions of this painting over the next few years which were exhibited to favourable response. Only in the first one could Santa Claus be described as jolly; all later depictions by Weir replace the amiable face with one wearing a manic leer.

This is not a comforting midnight visitor. With wild eyebrows, jagged teeth, and an ample collection of switches he might well be one of the sinister forest creatures of a Grimm Brothers’ fairy tale but there are signs of his bishop’s rank and his Dutch origins as well. A rosary dangles from his waist while a processional cross (or sword, say some) is stuck in his belt. His cloak is an ecclesiastical mozzetta, coloured the official episcopal red and trimmed with white fur, (though few bishops are seen sticking a stump of a pipe in their hood.) Dutch tiles, the image of a windmill above the mantle, a broken pipe on the floor and a peeled orange (signifying the ruling Dutch dynasty) make clear Santa’s ethnic origins.