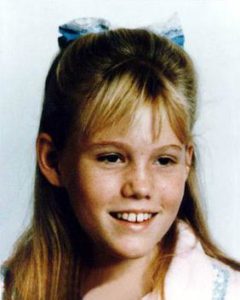 On June 10, 1991 eleven-year-old Jaycee Dugard was walking to school in South Lake Tahoe, California when she was approached by two strangers in a grey mid-size car. One knocked her down with a bolt from a taser gun and placed her in his car which then drove off. This abduction was witnessed by several other children and her stepfather who vainly tried to pursue the car on his mountain bike.

Jaycee’s kidnappers were convicted rapist Philip Garrido and his wife Nancy who took her to their property and locked her in a shed. For the next eighteen years she was repeatedly raped and abused, bearing Garrido two daughters, forbidden from receiving any medical care and threatened with death. She was forbidden to use her real name, told to treat Nancy as her mother, and to tell her children that she was their older sister. After a time she was allowed out to work in Garrido’s print shop. Neighbours tried to alert police to the strange goings-on behind the 8-foot-high fence at the Garrido household but no action was taken.

Garrido was quite insane. He was convinced that he could control sound with his mind and that he had developed a method to cure sexual urges. He visited the FBI to inform them of his discoveries and in August, 2009 went to the University of California at Berkeley trying to book a space to announce his program; he was accompanied by his two daughters. Their appearance and Garrido’s strangeness aroused the suspicions of officials there who learned that he was wanted for parole violations. The police were informed and when Garrido appeared at the parole office, this time with Jaycee and the girls, officers quizzed the young woman who insisted that her name was Alissa and that she was a battered wife from Minnesota, fleeing an abusive husband. Only after Garrido confessed to kidnapping and raping her did Jaycee, clearly a victim of Stockholm Syndrome, admit to her true identity.