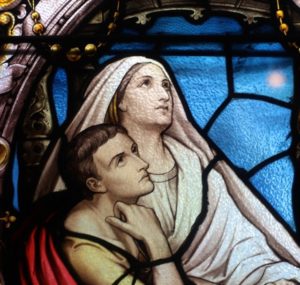 Few saints’ lives are as intertwined with that of their mother as was Saint Augustine of Hippo’s and his mother Monica’s.

Monica was born in present day Algeria during the fourth century of Berber stock and married the Roman official Patricius, by whom she had at least three children, two boys and a girl. Though she was raised a Christian, her husband was a pagan and forbade his children the baptism she wished to arrange for them. (Notwithstanding the objections of Patricius she made sure that her offspring were educated in her faith.) Her son Augustine was highly intelligent but lazy and broke her heart by adopting the dualist Manichean creed in his late teens during his studies in rhetoric in Carthage. Monica refused to see Augustine for a time after this though she continued to pray for his conversion. Her disapproval of his beloved concubine and her monumental expectations of him were too much for the young man and he departed in secret for Italy to set up as a rhetorician. Doggedly she followed him, first to Rome and then to Milan where Augustine finally became a Christian and was baptized by St Ambrose, much to Monica’s joy. Their plan was to return to Africa. In the seaport of Ostia as they awaited a ship,  Augustine and his mother sat at a window conversing of the life of the blessed; she turned to him and said, “Son, there is nothing now I care for in this life. What I shall now do or why I am here, I know not. The one reason I had for wishing to linger in this life a little longer was that I might see you a Catholic Christian before I died. This has God granted me superabundantly in seeing you reject earthly happiness to become His servant. What do I here?” A few days afterwards she had an attack of fever, and died in the year 387. (Her remains were later removed to Rome.)

Her tombstone reads: “Here the most virtuous mother of a young man set her ashes, a second light to your merits, Augustine. As a priest, serving the heavenly laws of peace, you taught the people entrusted to you with your character. A glory greater than the praise of your accomplishments crowns you both – Mother of the Virtues, more fortunate because of her offspring.” She is the patron saint of difficult marriages, disappointing children, victims of adultery or unfaithfulness, victims of (verbal) abuse, housewives, alcoholics (Monica herself had been a heavy drinker) and conversion of relatives, plus the city of Santa Monica in California.