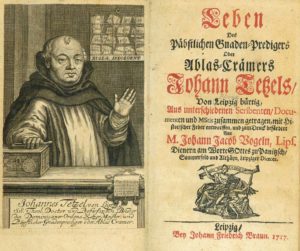 Seldom has the financing of public works had such profound consequences. In the early sixteenth century, the papacy was engaged in a long-standing and expensive renewal of Rome and its churches; the centre-piece of this project was the enormous St Peter’s Basilica. The old St Peter’s, dating back to the 300s, had been torn down and the finest architects and artists had been engaged to produce a splendid successor — Bramante, Bernini, and Michelangelo all worked on the building. Their talents were costly, so popes were always looking for ways to find funding for this Renaissance masterpiece. In 1517 Pope Leo X, in return for a large sum of money, granted a waiver of canon law to allow Archbishop Albrecht of Mainz to hold two sees simultaneously. In order that Albrecht not suffer too much financially, the pope also granted him the franchise to preach an indulgence campaign in parts of Germany. Half of the money raised would go to the building of St Peter’s and the other half to Albrecht.

The catechism defines an indulgence as “a remission before God of the temporal punishment due to sins whose guilt has already been forgiven, which the faithful Christian who is duly disposed gains under certain prescribed conditions through the action of the Church which, as the minister of redemption, dispenses and applies with authority the treasury of the satisfactions of Christ and the saints”. In the summer of 1517 the Dominican monk Johann Tetzel raised funds in Saxony in return for indulgences that would reduce the pains of Purgatory for those purchasing them or those already dead. Tetzel was an experienced preacher of such drives and his sermons were very effective. Unfortunately, he abused the permissible limits of indulgences by claiming in his sale pitch that “as soon as a coin in the coffer rings, a soul from Purgatory springs.”

Tetzel did not take his entourage to Wittenberg because its ruler, Frederick of Saxony, already possessed the rights to sell indulgences but word of Tetzel’s claims reached the ears of Augustinian monk Martin Luther. Luther was so incensed, both by the doctrine of indulgences and Tetzel’s fraudulent claims that he posted “97 Theses” on the doctrine of Purgatory and papal powers over the afterlife. This was the first shot in the battle we call the Protestant Reformation.

Tetzel was caught up in the controversy and was forced to retire in disgrace. Despite their disagreement, when Luther heard that Tetzel was dying he wrote to absolve him from responsibility for the firestorm that had erupted, telling him “not to be troubled, for the matter did not begin on his account, but the child had quite a different father.”