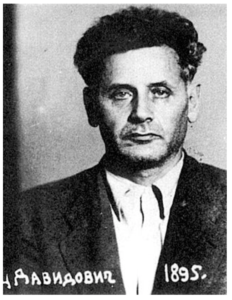 Night of the Murdered Poets

On August 12, 1952, thirteen major Soviet Jewish figures were executed. Their alleged crimes included espionage, bourgeois nationalism, “lack of true Soviet spirit,” and treason, including a plot to hand the Crimea over to American and Zionist imperialists.  In the group were famous writers such as Peretz Markish (above, winner of the Stalin Prize) , David Bergelson, and Itsik Fefer—which is why the date has come to be marked annually as the Night of the Murdered Poets—but the murdered also included an actor, a former deputy foreign minister, a scientist, and a general.  A fourteenth defendant died during the four years the group suffered in Moscow’s dreaded Lubyanka prison, and a fifteenth was merely sentenced to exile.

Though Jews such as Trotsky, Zinoviev, and Kamenev had featured prominently in the leadership of the Bolshevik Revolution, the fate of Judaism in the Soviet Union was not a happy one, especially during the Purges of the 1930s. During World War II when Stalin needed the help of the West, members of the Jewish Antifascist Committee, were sent to the United States to raise money and awareness. After the war this connection to international Judaism was perceived as a threat. In 1948 a series of murders and arrests by the secret police took a toll among the Jewish intelligentsia. In the grim cells of the Lubyanka Prison went former artistic luminaries, including men like Fefer who had loyally toed the Party line and informed on his fellows. They suffered years of torture to produce false confessions and were finally put on trial in 1952 when Stalin’s anti-Semitism was increasingly unchecked.

Following a cursory, secret trial, the thirteen were executed. After Stalin’s death in 1953 the new Soviet government reexamined their cases and declared them posthumously rehabilitated.