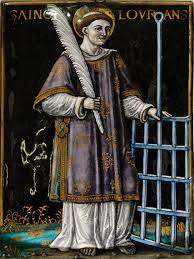 The Church is proud of its martyrs. It assigns days of the year to their remembrance; it adorns its buildings with their statues and paintings; it bids us name our children after them. It recommends that those suffering from disorders pray for the intercession of a saint whose suffering was similar — thus Job, who sat on a dunghill scraping his lesions with a shard of broken pottery, is petitioned by those with skin diseases. The Church also makes them patrons of places and professions and in doing the latter often manifests a grim sense of humour. The saint for August 10 is St Lawrence who is, among other things, the patron of short-order cooks. Why? Thereby hangs a tale.

Lawrence was an arch-deacon in Rome in 258, in the midst of the Valerian persecution, a wide-ranging attack on Christianity ordered by the imperial government. After the execution of Pope Sixtus II, Lawrence was left as the highest-ranking churchman in the capital. Knowing that it would not be long before he too would be arrested, he charitably gave away the Church’s funds lest they be seized by the pagan government. On August 10, 258 Lawrence was summoned to trial and ordered to bring the treasury of the Church with him. He appeared before the authorities accompanied by a train of orphans, beggars, and the sick, saying that these were the “true treasures of the Church”. He was then executed by being placed on a red-hot grid-iron (see  above) which led to him being the patron saint of cooks and kitchen workers. He can also be appealed to by those who have been burnt or suffering from lumbago. His patronage of comedians comes from the remark he made while undergoing torture on the grid-iron. “Turn me over,” he is supposed to have said, “I’m done on this side.”