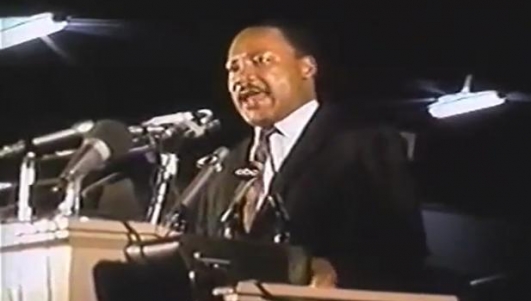 By 1968 Martin Luther King Jr., the Baptist clergyman who was a leading figure in the American civil rights movement and the winner of the 1964 Nobel Peace Prize, was an even more controversial figure than he had been during the campaigns of the 1950s and 1960s. Many white Americans who had supported him during the Montgomery bus boycott, the March on Washington, or the demonstrations in Selma had grown uneasy when he spoke of his opposition to the war in Vietnam, economic reparations for blacks, and what sounded like socialist economic solutions to poverty. To King, however, these issues were all of a piece and were a seamless appeal for justice. That commitment brought him to Tennessee in the spring of 1968 to support a strike by African-American sanitation workers against the city of Memphis (pictured above).

On April 3, 1968 in the Mason Temple, headquarters of the Church of God in Christ, King gave his last speech, one that was eerily prophetic and ended with this affirmation:

Well, I don’t know what will happen now. We’ve got some difficult days ahead. But it really doesn’t matter with me now, because I’ve been to the mountaintop. And I don’t mind.

Like anybody, I would like to live a long life. Longevity has its place. But I’m not concerned about that now. I just want to do God’s will. And He’s allowed me to go up to the mountain. And I’ve looked over. And I’ve seen the Promised Land. I may not get there with you. But I want you to know tonight, that we, as a people, will get to the promised land!

And so I’m happy, tonight. I’m not worried about anything. I’m not fearing any man. Mine eyes have seen the glory of the coming of the Lord.

Within 24 hours King was dead from an assassin’s rifle bullet.