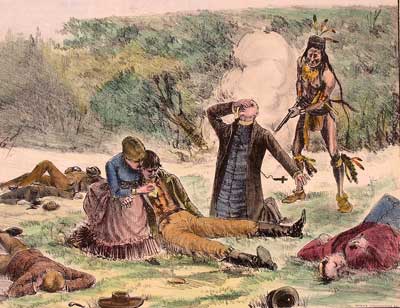 In 1885 some native tribes and Metis settlers in the Canadian Northwest Territories rose in rebellion. While most historians have focused on land claims, government inaction and the decline of the great buffalo herds as reasons for the uprising, there was a significant religious justification for it in the mind of Metis leader Louis Riel. There were also fatal consequences for some Catholic clergy.

In late March, violence broke out in the South Saskatchewan River Valley where a Metis militia defeated a government force at Duck Lake. This victory seems to have inspired some native bands to take up arms: the town of Battleford was looted as were a number of Hudson’s Bay Company posts. A Cree raiding party attacked the settlement at Frog Lake in what is now eastern Alberta. The leader of this group, Wandering Spirit (also known as Kapapamahchakwew), shot the local Indian agent in the head, and his followers murdered eight others before sacking and burning the village and mission. Seventy settlers were taken prisoner although sympathetic natives sheltered some and kept them safe. (A 2006 article in Alberta History suggests that there was a tenth man killed, the mission school teacher, A. Michaud, recently arrived from France.)

Among the dead were two priests, Leon Fafard and Felix Marchand. Father Fafard, a native of Quebec was 36 years old and had worked among the natives in the Fort Pitt district for past ten years, founding the mission of Notre Dame du Bon Conseil; Father Marchand, age 26, was a native of France and had not been in Canada long. Both were members of the Missionary Oblates of Mary Immaculate, a French order. Media depiction of the killings helped to arouse the federal government to send out an army to oppose the rebels.

After the rebellion was crushed, Wandering Spirit and his accomplices Round the Sky, Bad Arrow, Miserable Man, Iron Body, Little Bear, Crooked Leg, and Man Without Blood were convicted of treason for their actions in the Frog Lake Massacre; they were hanged on November 27 with two other Cree murderers in the largest mass execution in Canadian history and the last public hanging in Canada.

One thought on “April 2”