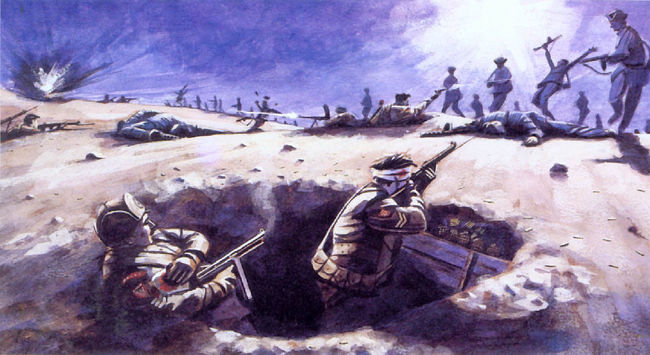 Canadians defeat the Chinese at Kapyong

The Korean War began with a North Korean invasion of the South, a surprise attack which just about succeeded in conquering the whole peninsula but which was eventually driven back by American troops. The American occupying forces were joined by troops of other countries in a war authorized by the United Nations. Among them were Canadian soldiers.

The U.N. counterattack pushed the North Koreans deep into their own territory but, in October 1950, hundreds of thousands of Communist Chinese troops crossed the Yalu river and forced U.N. units to retreat. The front gradually stabilized around the original border on the 38th parallel. The Canadian Encyclopedia tells the story of the epic battle at Kapyong:

In mid-April, the Chinese withdrew just past the 38th Parallel as part of a plan to lure UN forces into a position where they would be vulnerable to a major counter attack, which was unleashed on the South Korean army on 22 April 1951. The South Koreans were dislodged by the Chinese offensive, and the following day the British brigade was ordered to protect the South Korean withdrawal through the Kapyong River valley (about 20 kilometers south of the 38th parallel in central Korea).

The second battalion of Princess Patricia’s Canadian Light Infantry (2PPCLI), and the 3rd Battalion of the Royal Australian Regiment, were assigned forward hilltop positions, the Canadians on the west side of the valley and the Australians on the east.

The Australians bore the brunt of the initial attack and after heavy combat were forced to withdraw, with 155 casualties, late on 24 April. While the Australians fought, Stone ordered his Canadians, about 700 troops, to dig in on Hill 677 and prepare to repel a large brigade of massing Chinese forces, estimated at nearly 5,000-strong. After attacking the Australians, the Chinese turned their attention to the PPCLI, which managed — through heavy all-night fighting on 24 and 25 April — to stop the Chinese advance.

At one point in the battle, 400 Chinese soldiers descended on a single Canadian company of roughly 100 men, but the attack was repelled with numerous examples of valour: Private Wayne Mitchell, despite being wounded, charged the enemy three times with his Bren gun. He earned the Distinguished Conduct medal for his efforts.

The Chinese launched most of their attacks at night, in successive waves, using an intensive and aggressive approach of mortars, grenades and machine gun fire close to the Canadian front. On the night of the 24th, the Canadian battalion headquarters was attacked, and the assault was repelled with heavy fire.

The relentless waves of Chinese soldiers almost overran the position of D Company. With his men securely entrenched below ground, company commander Captain J. G. W. Mills, desperate and overrun, called for an artillery strike on the position of his own 10 Platoon. A battery of New Zealander guns obliged, firing 2,300 rounds of shells in less than an hour, destroying the Chinese forces on that position. The following night, Private Kenneth Barwise recovered the lost Vickers machine gun position in D Company, grabbed the gun, and ran back to his platoon. He had also single-handedly killed six Chinese soldiers during the attack on D Company, earning the Military Medal.

Amid the fighting, Stone refused to allow his men to withdraw — believing that the hill was a critical strategic point on the UN front — thereby stemming the tide of the Chinese offensive. While they defended the hill, the Canadians were cut off, and had to be supplied via air drop, allowing them to continue the fight until the Chinese retreated. As Canadian soldier Gerald Gowing remembered: “We were surrounded on the hills of Kapyong and there was a lot of fire. We were pretty well out of ammunition and out of food too. We did get some air supplies dropped in, but we were actually surrounded . . . that was a scary moment, let me tell you.”

The holding action of the Australians and Canadians at Kapyong allowed the UN forces to consolidate their troops for the next stage of operations. The Canadians had fought tenaciously against a Chinese army with a force several times their size. Stone, and other veterans of the Second World War, utilized their experiences in fighting on the rugged terrain of Sicily and Italy and applied it to the hills of Korea to good effect, but at a price. There were 23 Canadian casualties, including 10 soldiers killed, as well as an estimated 2,000 Chinese casualties.

The battle contributed significantly to the defeat of the general Chinese offensive against the South that spring, protecting the capital city of Seoul from re-occupation, and plugging the hole in the UN line to give the South Koreans time to retreat. The wider Communist offensive of 1951 was halted about a week after the battle, and from that point on the Korean conflict became largely a war of patrols and enemy harassment, rather than large-scale attacks, as the front lines stabilized and the two sides embarked on peace talks.

Both the Canadians and the Australians received the United States Presidential Unit Citation from the American government, the first time a Canadian unit had been so honoured.