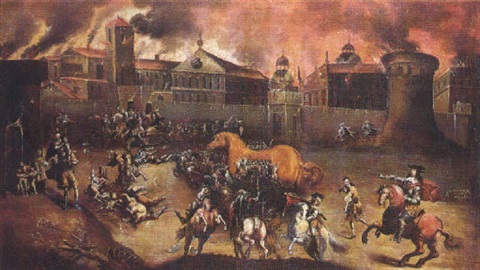 The end of the Trojan War

Now as for the carrying off of women, it is the deed, they say, of a rogue: but to make a stir about such as are carried off, argues a man a fool. Men of sense care nothing for such women, since it is plain that without their own consent they would never be forced away. The Asiatics, when the Greeks ran off with their women, never troubled themselves about the matter; but the Greeks, for the sake of a single Lacedaemonian girl, collected a vast armament, invaded Asia, and destroyed the kingdom of Priam.

So said Herodotus, the inventor of history. In trying to explain the centuries-old antipathy between Europe and Asia, he had recourse to the story of the Trojan war, a 10-year siege prompted by the kidnapping of Helen of Sparta by a prince of Troy. This story was told most famously by Homer in the Iliad and the Odyssey but also by dozens of oral bards, Greek playwrights, and Roman poets.

For centuries, scholars debated the truth of these legends and most were sceptical; it was not until the excavations undertaken in 1873 by Heinrich Schliemann on a mound near Hisarlik that academics began to take the existence of a Bronze Age Troy seriously. Schliemann’s discovery of golden treasures there and at Mycenae in Greece convinced many that the events described by Homer had actually taken place (even though the archaeological layer Schliemann declared to be Homeric was later shown to be too early in time.)

If the Trojan War legends do describe a real conflict between a prosperous city guarding the entrance to the Black Sea and a confederation of Greek raiders, when did it take place? My money is on the calculation by the Alexandrian Greek genius, Eratosthenes, who placed the end of the war at 1184 BC, a date that corresponds to Level VII on the chart below.