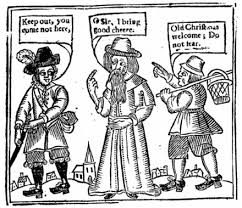 A seventeenth-century English tract, written as part of the intense debate on the propriety of celebrating Christmas. The devout Protestants known as Puritans argued that Christmas was a popish and heathen invention and spoke against the feasting, merriment and revelry of the holiday. For a time under the Commonwealth of the 1650s they succeeded in making it illegal.

The author of An Hue and Cry After Christmas uses Old Christmas as the personification of the season and asks: “Any man or woman, that can give any knowledge or tell any tidings of an old, old, very old grey-bearded gentleman, called Christmas, who was wont to be a a very familiar guest and visit all sorts of people, both poor and rich, and used to appear in glittering gold, silk and silver, in the court, and in all shapes in the theatre in White Hall, and had ringing, feasts and jollity in all places, both in the city and the country for his coming — whoever can tell what is become of him, or where he may be found, let him bring him back again into England.”

One thought on “A Hue and Cry After Christmas”