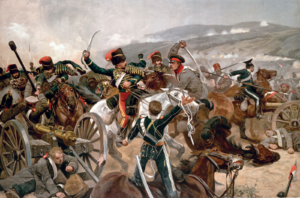 Half a league onward,

All in the valley of Death

Charge for the guns!” he said:

Into the valley of Death

Was there a man dismay’d?

Not tho’ the soldier knew

Theirs not to make reply,

Theirs not to reason why,

Theirs but to do and die:

Into the valley of Death

Cannon to right of them,

Cannon to left of them,

Cannon in front of them

Storm’d at with shot and shell,

Boldly they rode and well,

Into the jaws of Death,

Into the mouth of Hell

Flash’d all their sabres bare,

Flash’d as they turn’d in air

Charging an army, while

All the world wonder’d:

Right thro’ the line they broke;

Then they rode back, but not

Not the six hundred.

Cannon to right of them,

Cannon to left of them,

Storm’d at with shot and shell,

While horse and hero fell,

They that had fought so well

Came thro’ the jaws of Death,

Back from the mouth of Hell,

All that was left of them,

When can their glory fade?

O the wild charge they made!

All the world wonder’d.

Honor the charge they made!