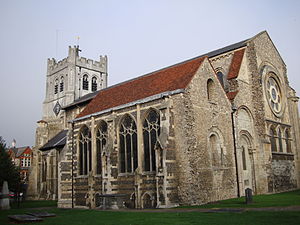 The English Reformation was a piecemeal process, directed from the top and often taking sinister turns. One such regrettable misstep was the epic looting known as the Dissolution of the Monasteries.

Though Henry VIII had begun the process of creating a Protestant England by removing the national church from the pope’s control, he still fancied himself a good Catholic theologically. Nonetheless, his chief adviser and evil genius Thomas Cromwell advanced the reform of religion by sanctioning an English translation of the Bible, arranging a (disastrous) Protestant marriage partner for Henry, and persuading the king that the monastic system which had endured in England for a thousand years be abolished.

Cromwell sent out commissioners to catalogue the wealth of the monasteries, priories, chantries and nunneries as well as investigators to take the spiritual temperature of the religious houses. Unsurprisingly, they reported to their master what he wanted to hear — that the monasteries were very rich and corrupt: indolent, sexually incontinent and parasites on the realm. The Henrician regime then embarked on a policy of suppressing this ancient system by buying out the abbots and priors with handsome pensions, booting the vast majority of the monks and nuns on to the street with little compensation, and judicially murdering those who opposed these acts. What resulted was one of the biggest involuntary transfers of wealth in history, on a par with the sack of Constantinople in 1204, the looting of Baghdad by the Mongols in 1258, and the British destruction of the Chinese Summer Palace in 1860.

Henry VIII did not really benefit from the seizure of these rich properties; most lands went to his supporters and vast sums were wasted on wars with France. The charities and schools that the monasteries had supported were often ignored by the lords who seized the revenues and the north of the country rose in a rebellion known as the Pilgrimage of Grace. The remains of these once-great institutions are evoked by Shakespeare who spoke of the “bare ruined choirs where late the sweet birds sang”.