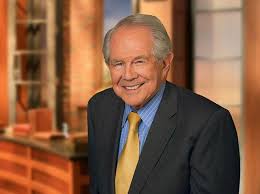 The son of a Democratic United States senator from Virginia, Pat Robertson turned from a career in the law to one in religion and made himself one of the most influential and enigmatic leaders of the so-called Christian Right during the Reagan era of the 1980s and beyond. As president of the Christian Coalition, which he founded, from 1989 to 1997, Robertson helped galvanize millions of evangelical Christians toward greater participation in the political process, and has himself considered running for the White House.

Raised in the Southern Baptist tradition, Robertson graduated magna cum laude from Washington and Lee University in 1950. After serving as a Marine Corps officer during the Korean conflict he returned to his education, receiving a J.D. from Yale Law School in 1955. Failures in an early business venture, and his attempts to pass the New York bar exam helped steer him back toward his religious roots. He attended a theological seminary, graduating with a B.Div., and worked for a time with the mostly black inner-city poor in Brooklyn before returning to Virginia where he was ordained a Southern Baptist minister in 1960.

Robertson demonstrated the intensely entrepreneurial side of his character in 1961 when he started operating WYAH, a television station in Virginia that became the first in the nation devoted to primarily religious programming. From this single station Robertson launched what would become a veritable communications empire: the Christian Broadcasting Network (CBN), offshoots of which grew to include a relief agency, cable television holdings, the American Center for Law and Justice, which specializes in First Amendment cases, and Regent University, which came to call itself “America’s premier Christian graduate school.”

The flagship program of his network was The 700 Club, which Robertson hosted from 1966. His success both behind and before the camera led many conservative Christians to promote Robertson’s involvement in U.S. politics. Though he at first thought political organizing was inconsistent with his clerical calling, he had a change of heart by the 1980s, when he began to organize mobilization efforts such as a 1980 “Washington for Jesus” rally and his own Freedom Council (1981-86). In 1984 he changed his party affiliation to Republican. When presented in 1987 with what was purported to be a petition of some 3.3 million names urging him to run for office, he resigned his church offices and launched a campaign for the 1988 Republican presidential nomination. Despite early successes in some primaries, Robertson’s candidacy had been decisively rejected by “Super Tuesday” in March of that year, even by many members of conservative Christian churches.

Undaunted by his electoral failure Robertson returned to the idea of grassroots organizing. In 1989 he founded and became the first president of the Christian Coalition, an organization whose mission was to represent evangelical opinion to government bodies, protest anti-Christian bias in public life, train leaders, and develop policies–all while being careful not to lose its tax-exempt status by supporting partisan candidates. The Christian Coalition proved very successful in enunciating the social agenda of the religious right in the United States. With a national membership well in excess of a million, the group raised the political profile of a hitherto-marginalized section of the population. Mirroring the Republican Party’s “Contract with America,” the Coalition advanced its “Contract with the American Family,” which was trumpeted as “A Bold Plan to Strengthen the Family and Restore Common-Sense Values.” Many attributed the G.O.P’s triumphs in 1996 Congressional races to the efforts of Robertson and his branch of the religious right.

Robertson astonished the media world in 1997 when, on the same day he resigned the presidency of the Christian Coalition, he sold his International Family Entertainment corporation to Rupert Murdoch, a media mogul whose television and newspaper holdings had often been criticized for taking the low moral road. Robertson tried to assuage criticism by promising that the hundreds of millions of dollars the sale had generated would go toward a new global television evangelism campaign as well as to enhance the endowment of Regent University. Part of the deal with Murdoch’s Fox Kids Worldwide Inc. was that The 700 Club would continue to be aired by the new entity and that CBN itself would remain independent.

Robertson remains a figure who defies easy characterization. For many on the political left, Robertson is, as described by Robert Boston, “the most dangerous man in America” due to his stances on social issues like homosexuality and the role of women. Those who valued the country’s multicultural heritage reacted with horror to Robertson’s suggestion that only devout Christians and Jews were fit to hold public office. Other liberals decried his proposals to abolish the Corporation for Public Broadcasting and the National Endowment for the Arts. Robertson’s hopes of restoring prayer to public schools and re-establishing the United States as a “Christian nation” seemed an affront to the constitutional separation of church and state and drew the ire of the Jewish Anti-Defamation League.

His capacity for stirring outrage continues to attract media attention. He seemed to attribute the 9/11 attacks in 2001 and Hurricane Katrina in 2005 as divine retribution against Americans for their permissive lifestyles; he blamed the 2010 Haiti earthquakes on a 1791 pact with the devil. He offended many fellow Christians with the suggestion that it was morally permissible to divorce a spouse with Alzheimer’s Disease and with revelations of financial dealings with African dictator Charles Taylor of Liberia. His frequent predictions of cataclysmic events that never ensue have grown tiresome.

Robertson is neither a backwoods fundamentalist nor a one-dimensional Elmer Gantry. He is well educated, well off, and well connected, with two American presidents on his family tree, and his pragmatism has made him an enormously successful businessman. His particular brand of charismatic theology, moreover, is opposed by many right-wing Christians who are uneasy about his claim to receiving divinely inspired “words of knowledge” and his belief that even the faithful will suffer from a pre-millennial period of tribulation before the final coming of Christ. During the 1988 primaries, for example, Robertson’s bid for the Republican nomination drew less support from members attending conservative Baptist churches than it did from other white voters. Despite the criticism he has received from some American Jewish groups, he is a leading defender of the state of Israel, which he sees in the context of Biblical end-times prophecies. Robertson, for a time, resumed the presidency of the Christian Coalition after the departure of Ralph Reed, and presided over the reorganization of the group into two entities–Christian Coalition International and Christian Coalition of America–in the wake of a 1999 IRS ruling that revoked its tax-exempt status. A supporter of Donald Trump, he continues to be active in business, media and social advocacy of issues favoured by the Christian right.