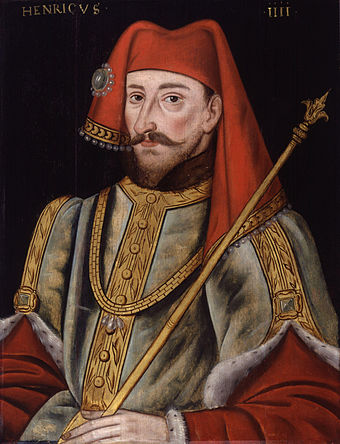 Henry IV of England(1367-1413)  was a usurper who assumed the throne after the deposition of Richard II. His claim was not as good as that of the Earl of March but, as the latter was too young, Henry succeeded and is considered the founder of the Lancastrian dynasty.

The focus of today’s entry is the prophecy that Henry would die in Jerusalem (and other predictions).

Robert Fabian was the first to relate the since often-quoted account of the circumstances attending the death of the fourth Henry:

‘In this year’ [1412], says the worthy citizen, ‘and twentieth day of the month of November, was a great council holden at the Whitefriars of London, by the which it was, among other things, concluded, that for the King’s great journey he intended to take in visiting the Holy Sepulchre of our Lord, certain galleys of war should be made, and other purveyance concerning the same journey.

Whereupon, all hasty and possible speed was made, but after the feast of Christmas, while he was making his prayers at St. Edward’s shrine, to take there his leave, and so to speed him on his journey, he became so sick, that such as were about him feared that he would have died right there: wherefore they, for his comfort, bore him into the Abbot’s place, and lodged him in a chamber; and there, upon a pallet, laid him before the fire, where he lay in great agony a certain of time.’

‘At length, when he was come to himself, not knowing where he was, freyned [inquired] of such as then were about him, what place that was: the which shewed to him, that it belonged unto the Abbot of Westminster: and for he felt himself so sick, he commanded to ask if that chamber had any special name. Whereunto it was answered, that it was named Jerusalem. Then said the king—”Loving be to the Father of Heaven, for now I know I shall die in this chamber, according to the prophecy of me before said that I should die in Jerusalem:” and so after, he made himself ready, and died shortly after, upon the day of St. Cuthbert, or the twentieth day of March 1413.’

This story has been frequently told with variations of places and persons; among the rest, of Gerbert, Pope Sylvester II, who died in 1003. Gerbert was a native of France, but, being imbued with a strong thirst for knowledge, he pursued his studies at Seville, then the great seat of learning among the Moors of Spain. Becoming an eminent mathematician and astronomer, he introduced the use of the Arabic numerals to the Christian nations of Europe; and, in consequence, acquired the name and fame of a most potent necromancer. So, as the tale is told, Gerbert, being very anxious to inquire into the future, but at the same time determined not to be cheated, by what Macbeth terms the juggling fiends, long considered how he could effect his purpose.

At last he hit upon a plan, which he put into execution by making, under certain favourable planetary conjunctions, a brazen head, and endowing it with speech. But still dreading diabolical deception, he gave the head power to utter only two words—plain ‘yes’ and ‘no.’ Now, there were two all-important questions, to which Gerbert anxiously desired responses. The first, prompted by ambition, regarded his advancement to the papal chair: the second referred to the length of his life,—for Gerbert, in his pursuit of magical knowledge, had entered into certain engagements with a certain party who shall be nameless: which rendered it very desirable that his life should reach to the longest possible span, the reversion, so to speak, being a very uncomfortable prospect.

Accordingly Gerbert asked the head, ‘Shall I become Pope? ‘The head replied, ‘Yes!’ The next question was, ‘Shall I die before I chant mass in Jerusalem?’ The answer was, `No!’ Of course, Gerbert had previously determined, that if the answer should be in the negative, he would take good care never to go to Jerusalem. But the certain party, previously hinted at, is not so easily cheated. Gerbert became Pope Sylvester, and one day while chanting mass in a church at Rome found himself suddenly very ill. On making inquiry, he learned that the church he was then in was named Jerusalem. At once, knowing his fate, he made preparations for his approaching end, which took place in a very short time.

Malispini relates in his Florentine history that the Emperor Frederick II had been warned, by a soothsayer, that he would die a violent death in Firenze (Florence). So Frederick avoided Firenze, and, that there might be no mistake about the matter, he shunned the town of Faenza also. But he thought there was no danger in visiting Firenzuolo, in the Appenines. There he was treacherously murdered in 1250, by his illegitimate son Manfred [No, he wasn’t; he died of dysentery. – GQB] Thus, says Malispini, he was unable to prevent the fulfilment of the prophecy.

The old English chroniclers tell a somewhat similar story of an Earl of Pembroke, who, being informed that he would be slain at Warwick, solicited and obtained the governorship of Berwick-upon-Tweed; to the end that he might not have an opportunity of even approaching the fatal district of Warwickshire. But a short time afterwards, the Earl being killed in repelling an invasion of the Scots, it was discovered that Barwick, as it was then pronounced, was the place meant by the quibbling prophet.

The period of the death of Henry IV was one of great political excitement, and consequently highly favourable to the propagation of prophecies of all kinds. The deposition of Richard and usurpation of Henry were said to have been foretold, many centuries previous, by the enchanter Merlin; and both parties, during the desolating civil wars that ensued, invented prophecies whenever it suited their purpose. Two prophecies of the ambiguous kind, ‘equivocations of the fiend that lies like truth,’ are recorded by the historians of the wars of the roses, and noticed by Shakspeare.

William de la Pole, first Duke of Suffolk, had been warned by a wizard, to beware of water and avoid the tower. So when his fall came, and he was ordered to leave England in three days, he made all haste from London, on his way to France, naturally supposing that the Tower of London, to which traitors were conveyed by water, was the place of danger indicated. On his passage across the Channel, however, he was captured by a ship named Nicholas of the Tower, commanded by a man surnamed Walter.

The other instance refers to Edmund Beaufort, Duke of Somerset, who is said to have consulted Margery Jourdemayne, the celebrated witch of Eye, with respect to his conduct and fate during the impending conflicts. She told him that he would be defeated and slain at a castle: but as long as he arrayed his forces and fought in the open field, he would be victorious and safe from harm. Shakspeare represents her familiar spirit saying:

‘Let him shun castles.
Safer shall he be on the sandy plain
Than where castles mounted stand.’

After the first battle of St. Albans, when the trembling monks crept from their cells to succour the wounded and inter the slain, they found the dead body of Somerset lying at the threshold of a mean alehouse, the sign of which was a castle. And thus,

‘Underneath an alehouse’ paltry sign,
The Castle, in St. Albans, Somerset
Hath made the wizard famous in his death.’

Cardinal Wolsey, it is said, had been warned to beware of Kingston. And supposing that the town of Kingston was indicated by the person who gave the warning, the cardinal took care never to pass through that town: preferring to go many miles about, though it lay in the direct road between his palaces of Esher and Hampton Court. But after his fall, when arrested by Sir William Kingston, and taken to the Abbey of Leicester, he said, ‘Father Abbot, I am come to leave my bones among you,’ for he knew that his end was at hand.