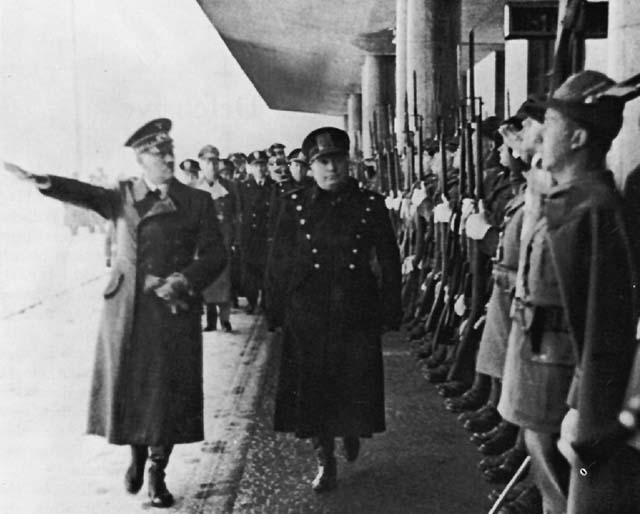 1940 Hitler and Mussolini meet at the Brenner Pass

By March 1940 the Second World War was six months old. Hitler’s armies had conquered Poland but had not faced much resistance from Britain and France: this was the period of the so-called sitzkrieg or “Phoney War”. Italy, though sympathetic to German aims, had remained on the sidelines. On this date the Italian dictator Benito Mussolini met the train carrying Hitler and the German foreign minister von Ribbentrop at a station in the Alps.

Both countries were intent on war with Britain and France but Mussolini entered the conference reluctant to act quickly. His war aims were to drive Britain from its Mediterranean possessions such as Malta and Gibraltar and to recover Corsica and Nice from the French.

The Hitler meeting is very cordial on both sides. The conference … is more a monologue than anything else. Hitler talks all the time, but is less agitated than usual. He makes few gestures and speaks in a quiet tone. He looks physically fit. Mussolini listens to him with interest and with deference. He speaks little and confirms his intention to move with Germany. He reserves to himself only the choice of the right moment . .. The conference ends with a short meal.

Later Mussolini gives me his impressions. He did not find in Hitler that uncompromising attitude which von Ribbentrop had led him to suspect. Yesterday, as well, von Ribbentrop only opened his mouth to harp on Hitler’s intransigency. Mussolini believes that Hitler will think twice before he begins an offensive on land.

The meeting has not substantially changed our position.

The Italians seem to have been deceived about Hitler’s plans because within weeks German armies were rolling in the west, invading Belgium, the Netherlands and France. At the point where the French were sure to lose, Mussolini joined in and attacked them from the south.