Both my readers will recall an entry a few days ago which chronicled the parenting skills of on Don Alonso Guzman who lent a knife to an enemy threatening to kill Alonso’s son. Today we consider the maternal feelings of one of the Renaissance’s most embattled women, Caterina Sforza.

Caterina (1463-1509) was the illegitimate daughter of the Duke of Milan and was married at age a very early age to Girolamo Riario, nephew of Pope Sixtus IV, lord of a pair of cities in the Romagna, Forli and Imola. She became well known for her intelligence and beauty and quickly gained a reputation for a strong-willed courage which her husband lacked. 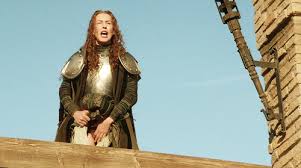 In 1488, her husband was murdered and their castle of Forli was under siege. Her children had fallen into the hands of the enemy, the Orsi family, and they in true Italian Renaissance style, threatened to kill the kids of Caterina did not surrender. According to one account, she taunted her foes, exposed her genital, and shouted “Fatelo, se volete: impiccateli pure davanti a me … qui ho quanto basta per farne altri!” (“Do it, if you want to: hang them even in front of me … here I have what’s necessary to make others!”) The Orsis were over-awed and her children were spared.

Caterina was no saint. She ordered murders, dealt with Machiavelli, and went on to endure much more — siege, treason, the murder of yet another husband, rape, and dungeons. She deserves to be better remembered than she is. Those interested should read The Tigress of Forli by Elizabeth Lev.