The recording industry has a long history of one-hit wonders, artists who produced only a single moment of musical glory and who then faded back into obscurity, “unwept, unhonoured, and unsung”. “96 Tears” by ? and the Mysterians; “Who Let the Dogs Out?” by Baha Men; “Harper Valley PTA” by Jeannie C. Riley will ring distant bells in the minds of my generation.

The same can be said for public speakers. Beyond the “Checkers” speech, who remembers the oratory of Richard Nixon? Can anyone recall one line in the rhetorical career of Dwight Eisenhower beyond his “military-industrial complex” warning? Will Greta Thunberg make it into the Verbal Eloquence Hall of Fame on only the strength of “How dare you!”? 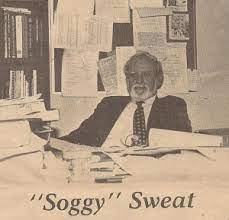 Let us, therefore, honour today the contribution of not-quite-immortal Noah S. “Soggy” Sweat, a one-term Mississippi legislator whose 1952 farewell address will live on the annals of He Only Gave One Speech but It Was a Doozy. The subject was the state regulation of the liquor trade.

If when you say whiskey you mean the devil’s brew, the poison scourge, the bloody monster, that defiles innocence, dethrones reason, destroys the home, creates misery and poverty, yea, literally takes the bread from the mouths of little children; if you mean the evil drink that topples the Christian man and woman from the pinnacle of righteous, gracious living into the bottomless pit of degradation, and despair, and shame and helplessness, and hopelessness, then certainly I am against it.

But, if when you say whiskey you mean the oil of conversation, the philosophic wine, the ale that is consumed when good fellows get together, that puts a song in their hearts and laughter on their lips, and the warm glow of contentment in their eyes; if you mean Christmas cheer; if you mean the stimulating drink that puts the spring in the old gentleman’s step on a frosty, crispy morning; if you mean the drink which enables a man to magnify his joy, and his happiness, and to forget, if only for a little while, life’s great tragedies, and heartaches, and sorrows; if you mean that drink, the sale of which pours into our treasuries untold millions of dollars, which are used to provide tender care for our little crippled children, our blind, our deaf, our dumb, our pitiful aged and infirm; to build highways and hospitals and schools, then certainly I am for it.