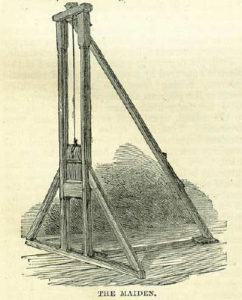 The execution of James Douglas

James Douglas, Earl of Morton (1516-1581) was a Scottish politician at a time when losing favour often meant losing one’s head. During the reign of Mary, Queen of Scots, he had sided with Protestant nobles supporting England and frustrating many of the queen’s actions. He had taken part in the murder of Mary’s favourite, David Rizzio, and was part of the army that compelled the queen to abdicate in favour of her baby son James. In 1572 he was named Regent, governing on behalf of James VI but he made enemies in the Scottish church and other noble factions. He was charged with the murder of Mary’s second husband Lord Darnley (who was blown up and strangled in 1567) and was executed by means of a guillotine-like device, nicknamed “The Maiden” which he had imported from England, based on the contraption used in Halifax, Yorkshire.

Holinshed’s Chronicle of 1587 describes the Halifax prototype of the guillotine and the curious law that made one susceptible to its embrace:

There is and hath been of ancient time a law, or rather a custom, at Halifax, that whosoever doth commit any felony, and is taken with the same, or confess the fact upon examination, if it be valued by four constables to amount to the sum of thirteen-pence halfpenny, he is forthwith beheaded upon one of the next market days (which fall usually upon the Tuesdays, Thursdays, and Saturdays), or else upon the same day that he is so convicted, if market be then holden. The engine wherewith the execution is done is a square block of wood, of the length of four feet and a half, which doth ride up and down in a slot, rabet, or regall, between two pieces of timber that are framed and set upright, of five yards in height.

In the nether end of the sliding block is an axe, keyed or fastened with an iron into the wood, which, being drawn up to the top of the frame, is there fastened by a wooden pin (with a notch made into the same, after the manner of a Samson’s post), unto the middest of which pin also there is a long rope fastened, that cometh down among the people; so that when the offender hath made his confession, and hath laid his neck over the nethermost block, every man there present doth either take hold of the rope (or putteth forth his arm so near to the same as he can get, in token that he is willing to see justice executed), and pulling out the pin in this manner, the head block wherein the axe is fastened doth fall down with such a violence, that if the neck of the transgressor were so big as that of a bull, it should be cut in sunder at a stroke, and roll from the body by an huge distance. If it be so that the offender be apprehended for an ox, sheep, kine, horse, or any such cattle, the self beast or other of the same kind shall have the end of the rope tied somewhere unto them, so that they being driven, do draw out the pin whereby the offender is executed.