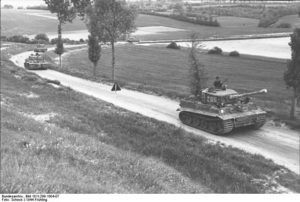 The June 6 D-Day landings were successful, in part, because of the German decision to station their heavy armour back from the beaches. Their theory was that their panzer divisions would be spared the initial aerial and naval bombardments that the Allies would use to secure their foothold, but that they could soon rush forward to crush the enemy. However, Allied mastery of the skies meant that German tanks could only move cautiously and at night. Consequently, Allied forces were able to penetrate inland before they encountered significant armoured opposition.

On June 13, British units moved toward the high ground near the village of Villers-Bocage. There they were ambushed by an SS panzer unit led by Hauptsturmfüfhrer Michael Wittman whose Tiger tank wrought havoc on the unsuspecting British. Within minutes Wittman had destroyed fourteen tanks and fifteen personnel carriers, along with two anti-tank guns – an astonishing feat that won him enormous propaganda fame in Germany and the decoration of the Knight’s Cross of the Iron Cross with Oak Leaves and Swords. Military historians have called this the greatest single-handed action in tank warfare.

Wittman’s career did not last much longer. Less than two months later, his panzer unit was ambushed in turn by British and Canadian armoured formations, equipped with the up-gunned Sherman Firefly, one of the few Allied machines capable of taking on Tigers. A shot through the turret of Wittman’s tank ignited ammunition killing him and his crew. 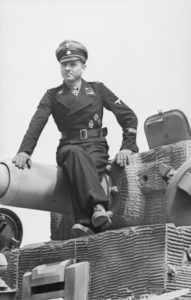