1415 The execution of John Hua

The late medieval church faced a number of serious challenges from reformers and heretics who disputed fundamental Catholic beliefs. John Wyclif, (1320-1384) an English priest, was foremost among those who drew up a list of errors they felt that the Church had fallen into: transubstantiation, the papal monarchy, a separate celibate priestly caste, the denial of Scripture in the vernacular, the abuse of indulgences, and a corrupt, wealthy superstructure. Wyclif was able to evade the usual fate awaiting heretics because he was found to be useful as an anti-ecclesiastical tool by powerful English politicians. Wyclif’s ideas spread in the 1390s to Bohemia where they were taken up by Jan Hus, a prominent preacher in Prague.

The Conciliar movement of the early 1400s attempted to restore the unity of the Church which had been shattered by rival papacies and to attack the heresies that the chaos of the 14th century had allowed to flourish. The 1409 Council of Pisa condemned Wyclif’s writings and pressure mounted against Hus who was identified as a supporter of the banned ideas. In 1414, under an imperial safe-conduct pass, Hus journeyed to the Council of Constance.

Instead of the open discussion he had expected, Hus was almost immediately imprisoned and charges of heresy brought against him. Catholic clerics had convinced the emperor that faith need not be kept with heretics and that his safe-conduct need not be honoured. This act was brought up repeatedly by writers during the 16th-century Protestant Reformation and underlay much of the hostility and suspicion manifested in religious debates of the time. 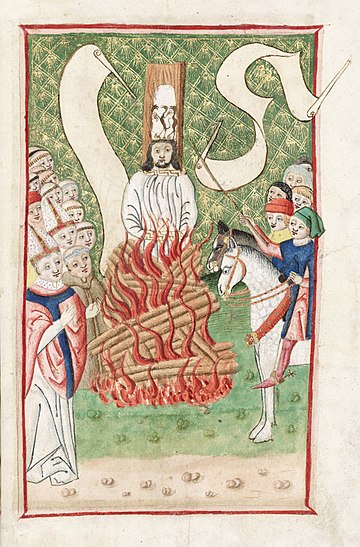 On July 6, 1415 his writings and those of Wyclif were deemed heretical and Hus was burned. News of this prompted the bloody Hussite Rebellion which lasted until the 1430s engulfing much of central Europe. In 1999 Pope John Paul II apologized for Hus’s treatment and praised his bravery.