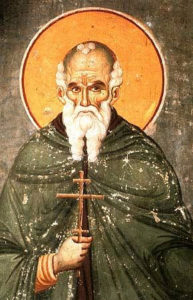 FOR a thousand years Athos, the Holy Mountain, the most easterly of the three large headlands which the peninsula of Chalcidice thrusts out into the Aegean Sea, has been the chief centre of Byzantine monasticism; for nearly all that time this “monastic republic” has been out of communion with the Holy See, but at the time of its inception and organization, and during the preceding centuries when it was occupied by little colonies of hermits, Athos was Catholic and a stronghold of orthodoxy in a different sense from that in which it is so today. The father of Mount Athos as a congeries of regular monasteries was one Athanasius, who was born at Trebizond about the year 920, the son of an Antiochene, and baptized Abraham. He studied at Constantinople, where he became a professor; and while he was teaching he met St Michael Maleinos and his nephew, Nicephorus Phocas, who as emperor was to be Abraham’s patron. He received the monastic habit in St Michael’s monastery at Kymina in Bithynia, taking the name of Athanasius, and lived there till about the year 958. Kymina was a laura, the name then reserved for monasteries wherein the monks lived in separate cells grouped more or less closely round their church. When the abbot St Michael Maleinos died Athanasius saw that he would be pretty surely elected in his place; he therefore fled, and eventually found his way to Mount Athos, to avoid this responsibility —only to find that God was reserving for him a greater.

He disguised himself as an ignorant fellow, assuming the name of Dorotheos, and hid in a cell near Karyes, but he was soon traced and found by his friend Nicephorus Phocas. He was about to undertake an expedition against the Saracens, and persuaded Athanasius to come to Crete to help him organize it (it is so often found that the contemplative soul is a capable man of affairs-which, after all, is only to be expected) and to support it with his blessing and prayers. Athanasius was very unwilling to make this sally out into the world and its concerns, but he went; the expedition was victorious, and Athanasius asked permission to return to Athos. But before he was allowed to he was forced to accept a large sum of money, with which he was to build a monastery. This, the first monastery proper on Athos, was begun in the spring of 961 and the church two years later; it was dedicated in honour of the All-holy Mother of God, but is now called “of St Athanasius “, or, more often, simply Laura, ” The Monastery”.

When Nicephorus Phocas became emperor, Athanasius feared that he might be called to court or to other honours and disturbing offices, so he ran away from Athos to Cyprus. Phocas again found him and told him to go back and govern his monastery in peace, giving him more money, with which was built a harbour for Athos. In adopting the laura system for his monks, Athanasius had deliberately reversed the policy of St Basil and St Theodore Studites and returned in a measure to the ancient monastic tradition of Egypt; his monks were to be as ” out of the world” as is possible for human beings (even now the Athonite monks are still extraordinarily” out of touch with things”, as a general rule). But in spite of this he was involved in great difficulties with the solitaries who had been on Athos long before he came and who felt, understandably, that generations of predecessors had given them a prescriptive right to have the place to themselves; they resented his coming there and building monasteries and churches and harbours, imposing rules and keeping order generally. Twice attempts were made to murder St Athanasius. Criminal violence spoils the best of causes, and the Emperor John Tzimisces interfered; he confirmed the donations and rights granted by Nicephorus Phocas, forbade opposition to Athanasius, and recognized his authority over the whole of the mountain and its inhabitants. He thus became superior general over fifty-eight communities of hermits and monks, and the monasteries of Iviron, Vatopedi and Esphigmenou were founded, which still exist as living communities. St Athanasius died about the year 1000, being killed with five of his monks by the falling of a keystone of the vault of the church on which they were working.