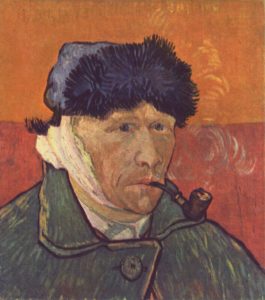 If there were a contest for the world’s best-loved artist, it would probably be won by Dutch painter Vincent van Gogh (1853-1890). His universally appealing art, his lack of success in his lifetime, and his self-destructive final years add up to a romantic and tragic tale of an unjustly-neglected genius.

Van Gogh was born into a well-to-do Dutch family who arranged for Vincent to be trained as an art dealer but after initial success in that field, he grew disenchanted and left the art world to become, first, a teacher, and then a Protestant minister. Neither profession suited Vincent whose bouts of depression and instability made him unemployable and caused his family worry. At the suggestion of his brother Theo, he took up art and spent the last ten years of his life exploring various techniques before settling on the bold post-Impressionist style that he made his own.

Though Van Gogh was attracting admiration from his fellow artists, his work was not commercially successful; his poverty would have prevented his painting had he not been supported by Theo. His greatest pieces came out of his last two years, after a move to Arles in the south of France. He worked quickly producing over 200 paintings and over 100 drawings and pastels. During this time he associated with Paul Gauguin and in the turbulence of this relationship, in December 1889, van Gogh cut his ear off and sent it to a prostitute. This was followed by a stay in a mental asylum which allowed him studio space and there he produced his gorgeous Starry Night. In May 1890 he left the asylum and moved to Auvers-sur-Oise to be treated by a homeopath, Dr Paul Gachet. His deep-seated mental illness, however, never left him and on July 27 he shot himself in the chest. It took him two days to die; he succumbed in the presence of his brother Theo who recorded Vincent’s last words as “The sadness will last forever”.