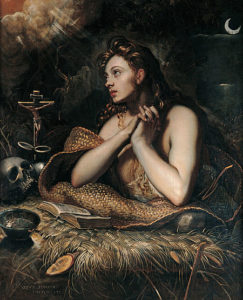 Confusion reigns supreme when it comes to investigating the real story of the saint known as Mary Magdalene. She is mentioned in the Gospels by name more often than almost any other follower of Jesus but she is often confused with an unnamed woman with a jar of ointment. She was present at the empty tomb but is better known for allegedly being the wife of Jesus. There is no reliable connection between her and a repentant prostitute but her name has become a byword for fallen women. Meet Mary Magdalene.

The first mention of this particular Mary — and there are a number of them surrounding Jesus — comes in the eighth chapter of Luke:

After that, Jesus traveled about from one town and village to another. The Twelve were with him, and also some women who had been cured of evil spirits and diseases: Mary (called Magdalene) from whom seven demons had come out—and many others. These women were helping to support them out of their own means.

She is then depicted as being at the crucifixion, as carrying spices to the tomb to anoint the body of the Lord and then as encountering the risen Christ. From this point things are far less certain. In the apocryphal Gnostic accounts, The Gospel of Mary, The Gospel of Philip and The Gospel of Thomas, she is treated as both important to the mission of Jesus and as his very intimate companion. The latter has this enigmatic passage:

Simon Peter said to them: Let Mary go forth from among us, for women are not worthy of the life. Jesus said: Behold, I shall lead her, that I may make her male, in order that she also may become a living spirit like you males. For every woman who makes herself male shall enter into the kingdom of heaven.

Then at the beginning of the seventh century we see the creation of what becomes known as “the composite Magdalene” in which three women — the Magdalene, Mary of Bethany and the penitent sinner — are merged. Pope Gregory in a homily conflates her with the repentant prostitute:

She whom Luke calls the sinful woman, whom John calls Mary, we believe to be the Mary from whom seven devils were ejected according to Mark. What did these seven devils signify, if not all the vices? . . . It is clear, that the woman previously used the unguent to perfume her flesh in forbidden acts. What she therefore displayed more scandalously, she was now offering to God in a more praiseworthy manner. She had coveted with earthly eyes, but now through penitence these are consumed with tears. She displayed her hair to set off her face, but now her hair dries her tears. She had spoken proud things with her mouth, but in kissing the Lord’s feet, she now planted her mouth on the Redeemer’s feet. For every delight, therefore, she had had in herself, she now immolated herself. She turned the mass of her crimes to virtues, in order to serve God entirely in penance.

Thus in Western medieval art Mary Magdalene is portrayed as an alluring, attractive woman with long red hair, often carrying a container of ointment. According to legend she and other disciples traveled miraculously to Gaul where they evangelized the south of France. Churches in Provence have longed claimed to possess her relics. The Eastern Church regards her as always chaste and living with the Virgin Mary in Ephesus until her death.